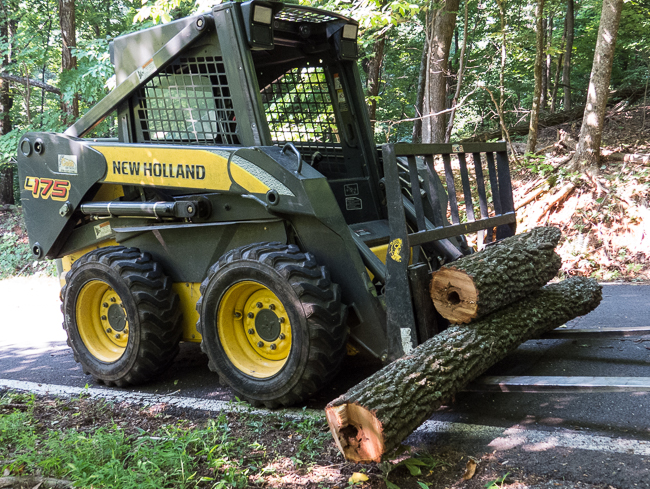 I heard the BOOM and went upstairs, but I didn’t hurry. I knew what it was.

A tree that falls on a road or hard ground makes a particular kind of BOOM. Once you hear it, your memory hangs onto it.

There was a sourwood at my house that was leaning over the road. It had a big scar near the base, where it looked like some car had hit it. Didn’t look too healthy up top, either.

So I’d ordered its death sentence.

The tree was across the road, and the tree guy had already cut it into chunks to be hauled away. I waved to him and snapped a few pictures.

Then I pointed to another sourwood that was leaning over our driveway. It, too, had a gap at the base. “Should I take that down, too?” I asked the tree guy. He shook his head. “It’s just that way with sourwood. They get that way at the base but it don’t mean the tree’s bad.”

He gestured at the corpse that he’d just cut up. “I wouldn’t have cut this one down. Just the top was bad.”

“Yeah.” He sounded resigned, like this wasn’t the first time he’d had a dumb request to cut down a perfectly good tree.

He walked across the driveway and stood next to another sourwood. “Look at this one.” It was growing crookedly up the side of the hill. “Sourwoods aren’t the big trees of the forest,” he said, a born educator warming to his subject. “The oaks are the bigs ones. The sourwoods fill in the space in between. They just grow in the gaps.”

He stood for a moment and then trudged back to remove the trunk of the sourwood he’d cut down. He seemed genuinely sorrowful. I felt terrible.

I wanted to assure him that I’ve got nothing against sourwoods. Their bark is thick and tough as the mountains they grow on. Their branches curve into drooping calligraphic lines. Their flowers grow in pale spikes that look like wedding cake trim. They have deep red leaves in the fall with fruit that lasts through the winter. They’re interesting and beautiful and native to these lands.

I just thought this one was a hazard. If only I’d known that it wasn’t.

Some naturalist I am. You can know a tree, but not know it. I killed an innocent tree.

Today’s penny is a 2012, when I learned to identify a sourwood.