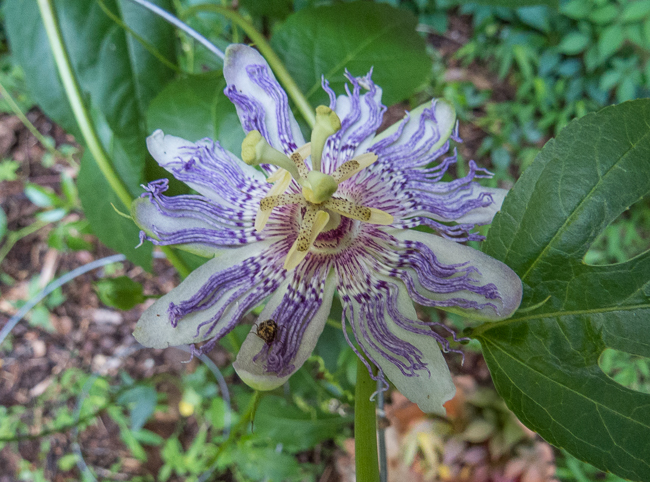 I’ll never forget the first time I saw one. I had just moved to North Georgia and was taking a walk when this wild-ass flower caught my eye.

I thought it was plastic at first. It had frilly fringes, purple petals with pink and white stripes, and a big yellow cruciform jumping out of the middle like a stripper out of a cake.

I couldn’t believe it was real. Then I thought I’d discovered a new species. I was so excited!

I called it the hippie flower and considered it my private possession, this rare creature that only I had seen. Because if other people had seen it too, why didn’t they talk about it excitedly at every opportunity?

The next year, in Master Naturalist class, I learned it is a very common wildflower. In fact, lots of people consider it a weed. They will curse it while they’re pulling it up out of their garden.

Passionflower is a vine with a sturdy root that seems to actually prefer poor soil. It will grow underground, overground, across the yard and up the bushes. It climbs like crazy. The flowers pop everywhere along the vine and bees adore them. Then you end up with a juicy fruit the size of an elongated golf ball, lip-smackin’ good.

But it wasn’t until 2011 that I learned of passionflower’s true magical powers.

When I took my herbalism course, I learned to make tinctures and teas from the leaves, flowers and fruit. Passiflora incarnata is a great anti-inflammatory and nervine, and it’s the go-to insomnia cure for herbalists.

It isn’t an aphrodisiac as you might think from the name. No, the origin is much holier than that: Spanish priests who found it in South America called it “The Flower of the Five Wounds,” and saw in its parts the elements of the Passion, the crucifixion of Christ. It is rather a miraculous plant. I stopped taking ibuprofen and when I have a muscle ache, I take passionflower instead. If I wake up in the middle of the night, it’s passionflower that calms me back to sleep.

I’m a passionflower evangelist. I gave away many bottles of the tincture to friends and family and showed them how to make the tincture themselves.

In 2013, I found a source of passionflower for regular harvest – a field at a farm where horses graze, never touched by chemicals. The passionflower from there makes a tincture that is so smooth and fine, it’s like 100-year-old Scotch.

I wanted my own crop of fresh leaves at hand. Our front yard is not landscaped, so I transplanted some passionflower and said, “Go forth and multiply! Take over the yard!”

It’s getting there. Last year I had five plants; this year I have 16. Today I got out of the car after my workout, and there they were – those wild-ass flowers – the first three passionflowers of the year.

The penny for today is a 2012, the year I planted Passiflora in the front yard.