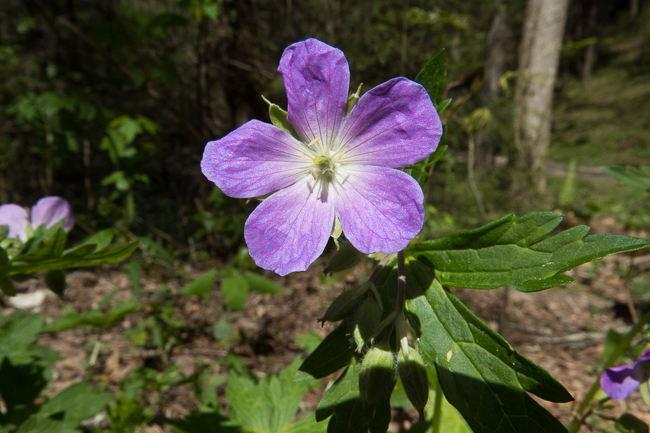 To start our vacation – a week in Booger Hollow – we took the long way into the forest. Along country back roads and up Forest Service 58 – following Noontootla Creek as it splashes its way down the mountainside – one of the prettiest drives in the Chattahoochee National Forest.

Swallowtail butterflies love this road, too. They fly loopily up and around on it. If you camp in one of the sites along 58, you can just sit and watch butterflies and listen to the creek and never need another thing all weekend.

Along the way is a place I call The Spot. I discovered it five years ago, the summer that I was taking an extended course in medicinal herbs of the Southern Appalachians.

The Spot is a rich cove near a small stream. If the bend in the road near my house is a pharmacy, then The Spot is a  pharmaceutical wholesaler.

What caught my eye first is the wild geraniums – a long stretch of them (pictured in featured image, above).

Though I have not used G. masculatum, my instructor Patricia Kyritsi Howell writes in her book Medicinal Plants of the Southern Appalachians that wild geranium is a very useful astringent. It can treat bleeding ulcers, diarrhea, heavy menstrual flow, among many other uses.

Then I saw Solomon’s Seal, Polyganatum biflorum, with its delicate bell-like blossoms dangling beneath the leaves. I usually notice that plant wherever it is, maybe because I have transplanted some from a friend to my meditation path at the cabin but they still haven’t blossomed: Tea made from the roots of Solomon’s Seal, Patricia taught me, soothes irritation of the lungs, stomach, and intestinal tract, and is also a good general tonic after illness. Native Americans would burn it to clear sleeping quarters to guarantee a restful sleep, she writes.

Nearby was the plant sometimes called “False Solomon’s Seal” because its leaves are similar and, according to some sources, it was used medicinally in the same ways as Solomon’s Seal.

I prefer the name Solomon’s Plume. No plant should be accused of falsehood just because humans are too lazy to learn its identity. Better yet, learn its scientific name, Smilecina racemosa.

Anyhow, there’s a very large patch of it at The Spot – note the plume on the tip: I also saw blue cohosh – a tonic for the female reproductive system. It was in flower at The Spot: Black cohosh, one of my personal favorites as a medicine, is a great anti-inflammatory. It’s also useful for symptoms of menopause. It grows along The Spot as well. But beware. You cannot identify black cohosh with certainty unless it is in bloom, or unless you see the seed stalk from the previous year. It often grows near a plant with nearly identical leaves that is poisonous – White baneberry, aka Doll’s Eyes, Actaea pachypoda.

And sure enough, close by was the toxic look-alike: Maidenhair fern’s soft plumes (Adiantum pedatum), which grow in a distinctive circle, are mild medicine but useful for sore throats and as cough expectorant: There’s yellow root here too, as it seems there is alongside every stream in the Chattahoochee. The leaves may seem ordinary, but the neon-yellow root is unmistakeable.

Yellow root tincture will cure you of just about any stomach ailment, is antibacterial and antifungal, and when you taste how bitter it is you will believe it. White, purple and yellow violets sprinkle themselves among the rest. They make a nice spring tonic.

I missed the fact that some had long, very thin spurs until Tom pointed them out:

Chickweed, Stellaria media, which I’ve used in teas and tinctures to help Tom’s sinusitis, was still in bloom here.

The Spot also hosted three other medicinal plants that weren’t in bloom but have such distinctive leaves that they can be identified by that alone.

Trout Lily (Erythronium americanum) is used in salads and as an emetic, an emollient, diuretic and stimulant: Mayapple (Podophyllum peltatum) – some derivatives have been used to treat cancer: I also saw a great number of plants with the characteristic basal parallel leaves of a monocot, but no blossoms yet – and it wasn’t a lady slipper because there were four to six leaves per plant.

I finally found some with a stem of blossoms-to-be, and I’m guessing that it is Bluebeard – Clintonia borealis – which has cardiac and disinfectant uses: There was also a trillium that I had never seen before. Its blossom was above the leaves on a short frail stem, though the leaves were very rounded like Vasey’s trillium. Then uphill, something white caught my eye amid the Mayapple leaves. There was the trillium in bloom! White flowers with crinkly edged petals: Large-flowered trillium (Trillium grandiflorum). I don’t think I’ve ever seen this one before.

We finally moved on, heading toward the cabin. One last glimpse of white along the road made me smile, a final bit of medicine – Bowman’s root – a purgative.

With a big dose of flower medicine, I am ready to purge my stress in the coming week.

Today’s penny is a 2006, the year that Patricia Kyritsi Howell’s wonderful book was published.