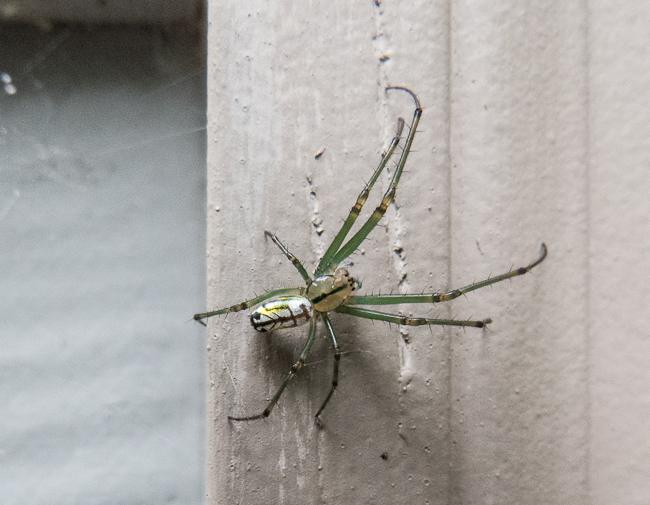 This pretty orb weaver has a body less than half an inch long. She’s built a nice web on my deck in a perfect location – where I won’t walk into it, but she’s catching plenty of insects to eat. We’re both happy.

She has been a touch of beauty in an otherwise terrible week [June 16]. Seeing the faces of those 49 young people in Orlando, then all the shouting over gun control. So much ugliness, enlarged by social media, where I can’t seem to look away because I want to fight back.

In the midst of this, I found respite on two special Facebook pages: Spider and Insect Enthusiast group, and Snake Identification group.

Here, the debates are about genus and species. Every group member tries to offer helpful information if they have it.

No one shrieked, “EWWWW!” when I posted photos of this lovely spider.

No one yells, “Kill them all!” when a helpful black rat snake’s photo appears.

Venomous snakes are treated with the same respect as non-venomous. Group members patiently explain, over and over, that snakes are very helpful in controlling rodents and that most snakes will go away if you leave them alone.

Innocent spiders are spared an unjust fate. They can carry on trying to make a living without being walloped just for being what they are. And in the process, consume an average of 2,000 insects – the ones that actually DO bite us – every year.

Uninformed people join these groups to learn, or to ask for an identification when they are worried about a particular snake or spider around their house. They are grateful to people who share their knowledge.

The words “thank you” and “please” are in regular use. The comments often include the word “beautiful.” The jokes are all good-natured.

The moderators are calm and clear. They close discussion if comments go on and on without purpose. They delete posts that are profane, off-topic, or that advocate killing, and they explain why. Every time.

They also don’t allow attacks on other group members, or harassing of someone who’s killed a spider or snake out of ignorance.

“Educate – don’t berate,” is the motto of the snake group.

Commenters are friendly, supportive, and generous with their willingness to explain. They point out the exact parts of the snake or insect or spider that led them to make the identification.

So instead of being filled with vitriol, sniping, and name-calling, my Facebook feed is now filled with photos of beautiful creatures and supportive, friendly people who want to learn about nature. And I’m gradually losing my remaining fears of snakes and spiders.

Today’s penny is a 2000. That’s the year that Kaufman Guides were launched by Houghton Mifflin – and I’m about to buy their field guide to insects.