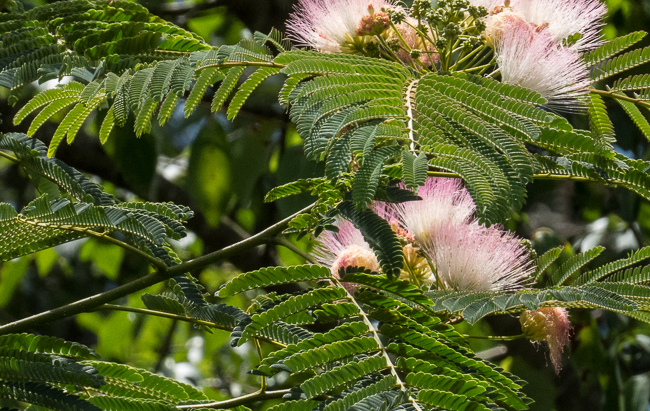 I had a bunch of mimosas while driving today.

Not the kind with champagne. I mean those trees with the pretty pink fringed puffballs that serve as blossoms.

June is the time when you see them everywhere in Georgia. Not just in front of homes, but in vacant lots, anywhere that’s been left alone. This tree seems quintessentially Southern to me, sort of the Mint Julep of the tree world.

But the mimosa isn’t any more Southern than I am. It’s a transplant from Asia, brought in as an ornamental in 1745.

Non-native plants can crowd out native plants and disturb the ecosystem. Hard to think of such a frilly plant as aggressive, but here’s how the National Park Service describes it:

Mimosa is a medium-sized tree that is a continual problem along some roadsides and streams in the Smokies. It seeds prolifically and resprouts quickly when cut. Mimosa seeds may remain viable for 50 years or more.

The Park Service and U.S. Forest Service invest in crews to uproot non-native invasives, so as to preserve the space for native plants. Putting a tree on the hit list is not just academic. I don’t think I could bring myself to cut down a mimosa if I had one. They’re just so pretty.  As with wisteria, that’s the problem.

When we lived in Dubai, we went with some friends to a restaurant for brunch and ordered mimosas. It was a fancy restaurant but they were having a special discounted price for brunch.

Mimosas weren’t on the menu, so we had to describe to the waiter what a mimosa was. We laughed amongst ourselves that a mimosa would be considered an exotic drink.

He brought them and they were delicious. Then we got the bill. Those mimosas were $30 apiece – about double what the meal itself cost.

I think non-native species are like that. An exotic pleasure, a nice touch – until you see the price tag.

Today’s penny is a 2006, the year of the expensive Dubai mimosas.