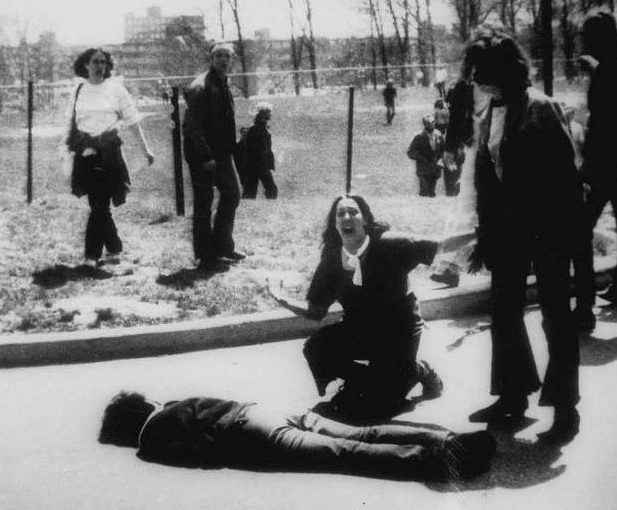 I was only 10 years old, but I remember seeing the newspaper front page with the story about the students being shot.

The late 1960s were strange and difficult years to be a kid. Adults shouting at each other about the Vietnam War. My older sisters wearing “love beads” and going to “coffee houses,” which seemed to garner an inordinate amount of disapproval. None of it made sense to me.

But then Kent State happened.

They shot the students.

Four dead and nine wounded. Some of those students were just walking to class.

I don’t remember how the nuns at my Catholic elementary school explained the state’s use of deadly force against unarmed students. Or if they even tried.

But it radicalized me.

Before Kent State, I wrote pretty poems about sunsets and seagulls. Not long after, I began writing anti-war poems.

I graduated from Kent State with a degree in journalism. My classes were in Taylor Hall, overlooking the sight of the shootings.

Years later, when I began to train journalists overseas, I often thought about May 4, 1970. It kept me from being too preachy about the greatness of American democracy.

When I worked with journalists in countries where oppressive governments shot their own citizens – China, Egypt, Afghanistan, and others – I made a point of telling them about Kent State.

Eternal vigilance is the price of liberty; power is ever stealing from the many to the few.

So said abolitionist and liberal activist Wendell Phillips, in 1852.

The iconic featured image above is John Filo‘s Pulitzer Prize-winning photograph of Mary Ann Vecchio, a 14-year-old runaway kneeling over the body of Jeffrey Miller moments after he was shot by the National Guard.