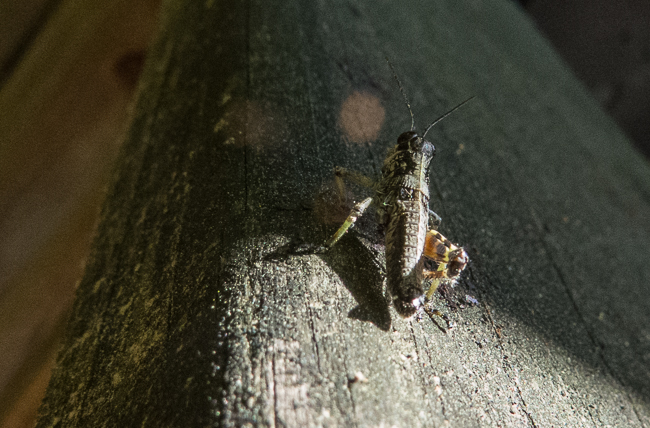 When we’re at the cabin, we sit around for hours, reading or just looking at nature. Booger Hollow is that kind of place.

Sitting still, outside, gives me the chance to observe lots of insects.

So I saw this guy. He was moving along the railing and I got closer to watch.

Then I noticed he was missing one of his large hindlegs. The ones that are so important to the order Orthoptera’s crickets and grasshoppers.

We love these insects because they jump, and because they sing. Grasshoppers use their hindleg for both those things.

What could a grasshopper be without a hindleg?

Apparently, he could be just fine.

Insects have evolved with many very ingenious defenses. Camouflage is the first defense for many of the Orthoptera (see: Katydid). If pursued, though, some can emit poison, or throw up on their attacker. They also jump and kick with their hindlegs.

According to my favorite bug reference, Firefly Encyclopedia of Insects and Spiders,

If held by a hindleg, a grasshopper will sacrifice the limb by the contraction of a special muscle at the base. A small diaphragm immediately closes the wound and prevents infection or massive blood loss.

That must be what happened to this guy.

I tried not to freak him out. I’ve found if you move slowly, you can capture photos of lots of insects.

After a couple of frames, suddenly – he jumped! About six inches, right onto a kerosene lantern.

He may be one-legged, but he ain’t disabled.

In case you want a view of a cricket leg (as opposed to a grasshopper) – here’s another one that was hitchhiking on Tom’s daypack: How to tell the difference between grasshoppers and crickets? Easiest is by the length of their antennas – crickets have long antennas, like the hitchhiker above; grasshoppers have short ones, like my one-legger in the featured image.

Today’s penny is a 2002. Two species of Orthoptera in the US are extinct, according to the Firefly Encyclopedia, which was published in that year.