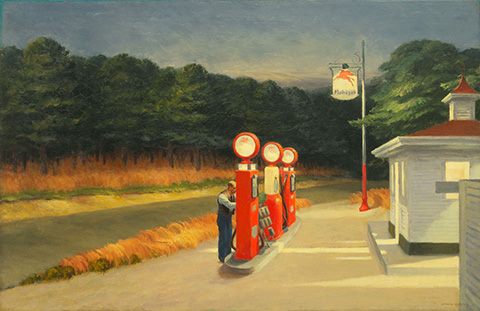 I was sitting at one of those interminable stoplights, when you get off the interstate and have to wait for three light changes of two minutes each just to make a left turn.

It was blazing hot and I had a swig of water. Then I saw her.

A woman with a ragged short haircut, wearing dirty and disheveled clothes. She was carrying a sign scrawled on a scrap piece from a box.

I could guess what it said before I could actually make out the words: “HOMELESS VET – PLEASE HELP”

She walked slowly between the dense lanes of cars waiting at the light. She didn’t stop at every car – only the ones who opened their window. Few did.

Although she was very thin, it seemed that she’d once been in good shape. The outline of well-defined muscles remained.

I often get this response from homeless folks – they seem to appreciate even the acknowledgment, someone who will look them in the eyes and speak to them, look at them as a human being instead of a bag of trash.

Her eyes were not quite calibrated. Her face had a couple of cuts on it. Her timid smile was lopsided. I thought of Tom, who’s a veteran, and his temporarily lopsided smile being fixed by therapists in rehab, all costs covered by his excellent health insurance.

“But do you want some food?” I asked her.

I reached over on the seat, fumbling for anything I had. My hand fell on the gift basket of fruit from Tom’s co-workers that I was bringing to him. I ripped the cellophane off and grabbed an apple.

Her face fell. “Sorry, I can’t eat it,” she said, pointing to the gap where her front teeth were missing.

“Oh God, of course,” I said. I dug around on the seat and came upon my insulated food bag. All it contained was a half-frozen veggie burger and a bag of cherries.

“Cherries? Can you eat cherries?”

Her eyes lit up again. “Yes!” she said. I handed the bag to her. I was sorry that it wasn’t a full 2-pound bag, but at least having had some of them, I knew they were very good. I had been looking forward to sharing them with Tom.

“Thank you so much!”

Up ahead, the light turned green. She smiled again and moved on, saying again, “Thank you!”

I don’t know if she was a vet, and I don’t care. I don’t know what circumstances led her to be so desperate that she has to walk the road in rags holding a sign and begging politely to long streams of strangers.

I just know that there but for the grace of God go you or I.

Christ said, “Judge not, that you may not be judged.” Matthew 7:1

I feel the isolation so strongly these days. I know so few of my neighbors. I read online discussions that seem bent on making the divisions in our country worse. I see harsh judgment passed against entire groups of people. All of it makes us more and more isolated from one another.

Some would say that isolation is the condition of modernity, a condition that has been with us for far more than 100 years. If I live to be 100, I hope we humans have evolved just a little – enough to deliberately overcome some of that isolation.

It seems appropriate that it’s Edward Hopper’s birthday today.  Hopper painted isolation beautifully, as in the featured image above, “Gas,” 1940. (The painting is currently on loan to the Art Institute of Chicago for a special exhibit.)

8 thoughts on “A bag of cherries”