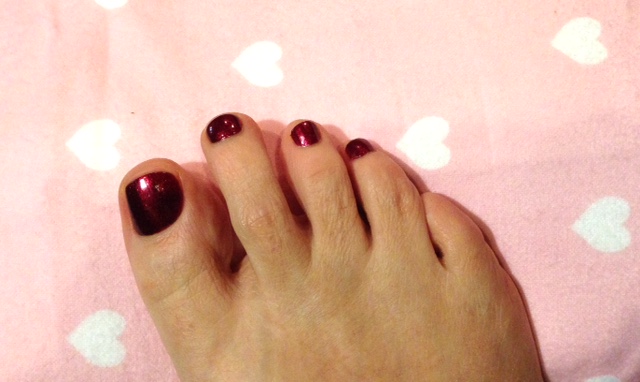 I read Ms. Magazine from its first year, 1972. I was barely a teenager, but I would scratch out “Miss/Mrs.” on forms and write in “Ms.”

Throughout my career, I’ve been correcting reporters, editors and people at large for referring to young women as “girls.”

But there’s something about a pink flannel pillow sham with hearts on it… And getting a pedicure, with red polish … Taking a bath with lavender … And vamping for the camera…

That girlie stuff is good stuff.

And the best part of the girlie stuff is … girlfriends to share it with.

Today was the 60-day anniversary of my brain aneurysm, and I celebrated it in style – because I have very cool girlfriends.

Sara treated me to a pedicure – and we sipped Proseco she carried into the salon. We got the same toenail polish, a warm and sparkly red (showing it off in the featured image above).

We admired our marvelous toes while leaning into the oversized luxury massage chairs, and toasted for a dozen photo attempts with the anniversary declaration Sara made: When I got the mail, the celebration continued. Kimberly had sent me the pink flannel pillow cover that’s cradling my head as I write this, along with lavender bath salts, and another of her terrific hand-drawn cards:

It’s great to be one.