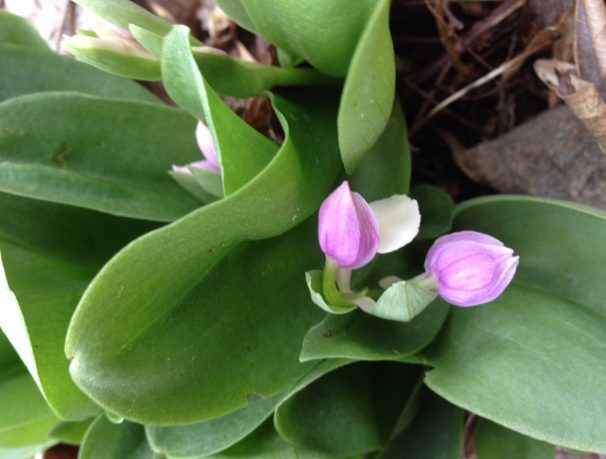 I just wanted to see one.

My emotional state this afternoon needed a strong dose of nature, so I took a hike. And I was thinking about the showy orchid.

I’d only seen one before, in all nine of my Appalachian springs. The orchid was an omen I longed for. Just one, to make me happy.

I hiked the same trail as where I’d seen the showy orchid before, and kept my eyes peeled for its leaves. Galearis spectabilis is a monocot, a division within the plant kingdom that’s easy to sort because it has leaves with parallel veins.

Monocots are your grasses, lily, iris, and orchids. Those leaves – straight, blade-like – make it easy it to identify monocots.

It was hard to pay attention to leaves in the forest today, though. Everywhere, wildflowers were bursting toward the sun – in great clumps – There were even a few dwarf crested iris in bloom – another monocot: The blossoms of the Galearis spectabilis are smaller and less spectacular than the crested iris. They are a shy, modest pink and white. I think it’s a little strange that the common name is showy orchid, because as orchids go, it isn’t that showy.

because they’re beautiful, well-liked, interesting, and can be used as a bellwether for the health of an ecosystem. So, if you see orchids starting to disappear, they’re probably just the first of many species that will vanish.

An indicator species, in other words.

Orchids need certain fungi to be present in the soil and so they won’t grow just anywhere. McCormick says,

An ecosystem that is not healthy, that doesn’t have the full complement of fungal species that it normally would—maybe it has been invaded by other species or the soil has been turned up—will not support orchids very well. It is true that many of our native orchids are declining, some precipitously.

So my hunt for the showy orchid was not only to add it to my naturalist notebook. The orchid is a sign of health.

For both me and the forest.

Let me see just one more.

There. I spotted a monocot leaf. And then another one. Small. Suddenly I saw the whole patch, all at once, more than a dozen showy orchid plants. A big patch of them. I got on my knees in the dirt, and looked at every single one up close. I breathed deeply and looked at the forest all around me.

Today’s penny is a 2014, the year when I first saw a Galearis spectabilis in the wild.