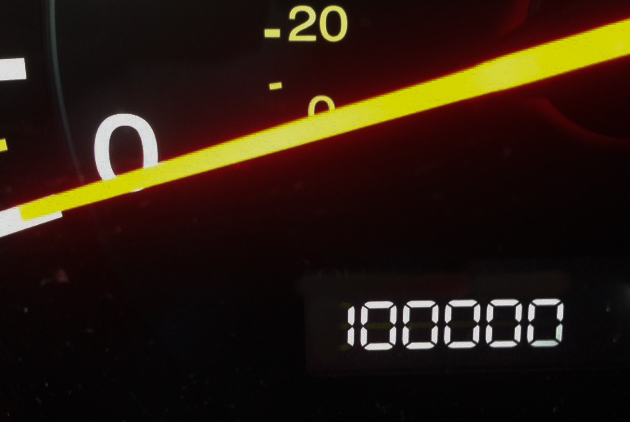 I’ve been watching the odometer and I kept thinking of the lyrics from that John Denver song, “On the Road”:

If I could have, I’d have gotten out of Charlotte today and pushed her a mile. She deserves it.

I used to roll my eyes at people who were in love with their cars. A chunk of metal that burns fossil fuels? Puh-leez.

My first cars were unnamed. I bought them to get from Point A to Point B. I didn’t even own a car for 17 years in Seattle. And that was long before Uber.

My lovely lady in gray came into my life exactly nine years ago, June 20, 2007. She’s a 2004 Accord EX, five speed, a little fancier than I was actually looking for. But there were only two stick-shifts in the whole huge lot of used cars at the Honda dealer in Arlington, VA, and the other one was red. I named her Charlotte for two reasons: 1. We had come back from overseas to live in the South, and it seemed like a good Southern name. 2. Charlotte’s Web was my favorite book as a kid, and the main character was grey and smart just like my Honda girl.

Although that’s low mileage, it sounds like a lot when it’s all added up. If someone had told me then that I was being sentenced to drive 63,000 miles as a punishment, I’d have gasped, staggered and begged for the lashes instead.

Driving Charlotte is fun. She’s got lots of pickup even though she’s only a four-cylinder. She’s the first car I’ve owned with heated leather seats, and the power adjustments make her comfortable no matter what condition I’m in.

She’s also practical: She can hold eight-foot boards, chairs, and inconceivable amounts of groceries. Charlotte carried Tom and I with all our many suitcases from D.C. to our new home in North Georgia.

We’ve been on some great road trips: Ohio, North Carolina, Florida, Tennessee, and all around Georgia. She does just fine on gravel roads in the Chattahoochee National Forest. She’s never let me down, and I’ve hardly spent a penny on her beyond new tires and ordinary maintenance.

Charlotte is my third Honda. The first one, a Civic, was totaled when a driver cut me off on the freeway. Even though I went head-on into a retaining wall, my only injuries were a few bruises from the seat belt. My second Honda, an Accord, got stolen once in Seattle but I got her back intact; was sad to sell her when I moved to China.

Charlotte’s my forever girl. I intend to drive her until one of us can’t move anymore.

Today’s penny is a 2007, the year that Charlotte first brought me home safely.