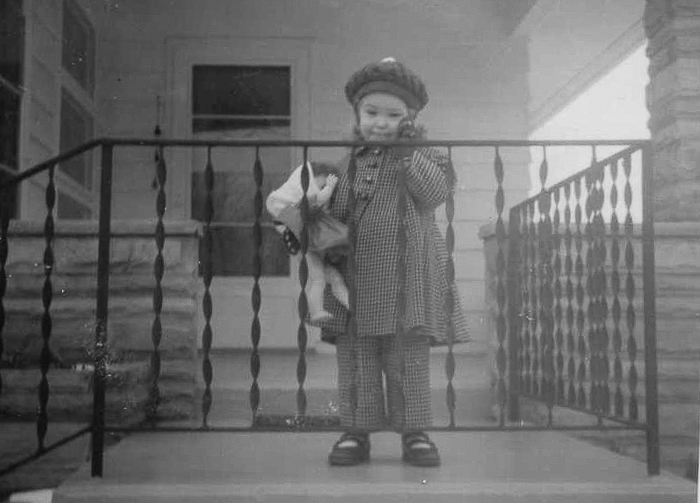 Yes, that’s me, and no, I was not a refugee from Russia.

I am the youngest of four girls, and we all wore hand-me-downs from our cousins and siblings. They were sometimes embarrassingly ugly and shabby, but we were not allowed to complain about this.

“Your father works hard,” Mom would say. The implication being, Whatever he earns is enough and we will be grateful.

My parents, who themselves had worn hand-me-downs for much of childhood, did not believe in buying on credit.

I remember a gray wool coat that all four of us wore. It must have been 15 years old by the time I got it. I hated it so much that I cut off one of the buttons and threw it away. It was a large, prominent button in an unusual style and I knew it wasn’t replaceable.

Mom fussed about the missing button, and I got another, less ugly hand-me-down coat.

Then there was the Easter outfit I was forced to wear, a navy cotton suit, made worse by the ruffled cuffs of the blouse. No wonder I looked so unhappy: You would think that being forced to wear clothes that were not of my choosing might have caused a strong counter-reaction and turned me into a fashionista.

My mother was that way. When she was little, during the Great Depression, her parents owned a store, and she had to wear the ugly shoes that no one would buy. She spent the rest of her life making up for that. We joked that she had more shoes than Imelda Marcos.

I think, now, that it must have been hard for her to dress her daughters in hand-me-downs, and much harder when we whined about it. She sewed, even though she hated it, so that we could have some new clothes.

I did indeed have my bimbo years when I was a reporter at a major metro newspaper.

But by the time I was in my mid-30s, I discovered the joy of consignment and thrift stores. There was a year when I was trying to live on just $300 a month plus my rent, and thrift stores satisfied the compulsion to have something new.

What’s not to love? Thrift stores have plenty of choice – but not so much as to be overwhelming.

For the cost of one new sweater I can buy 10 sweaters. It’s even environmentally correct: Perfectly good clothes are getting recycled instead of thrown away.

Besides, it’s safer to take on someone else’s clothes. Especially when you don’t really know any more what you want to wear.

In recent years, a typical day’s attire for me, working at home, was a generic t-shirt, man’s work shirt from Goodwill, Dockers from Tom. If I dressed up, a Goodwill silk blouse over a factory-outlet camisole and black pants that a neighbor gave me.

I’ve always been proud of my frugality. I told myself that living on less has the same net effect as an increase in income.

But it doesn’t, quite. Scrimping on myself eventually made me feel like I was someone not worth spending money on.

At the end of a recent year, I was appalled to see how little I had spent on clothes and other treats like pedicures and massages. It was just a few hundred dollars for the whole year – and I had plenty of money. I was treating myself so shabbily.

Today I was at Costco, and almost bought a flannel shirt just because it was such a low price. Then I looked at myself in the mirror holding it up, and I didn’t like who I saw: a woman concealing her love of beauty under a very large price tag.

I put the shirt back in the pile.

Today I vowed to stop looking like a refugee. To dress, instead, the way I like because it’s expressive or pretty or even sexy.

Yes, that could be a hand-me-down or a thrift store dress – but I will wear it because it pleases me. Not because it’s cheap.

Today, I discard into the throw-away pile the attitude that says it’s vanity to have clothes that make you smile.

Today’s penny is a 1993, when I was at the peak of my thrift-store buying. That penny, too, is going into the pile.