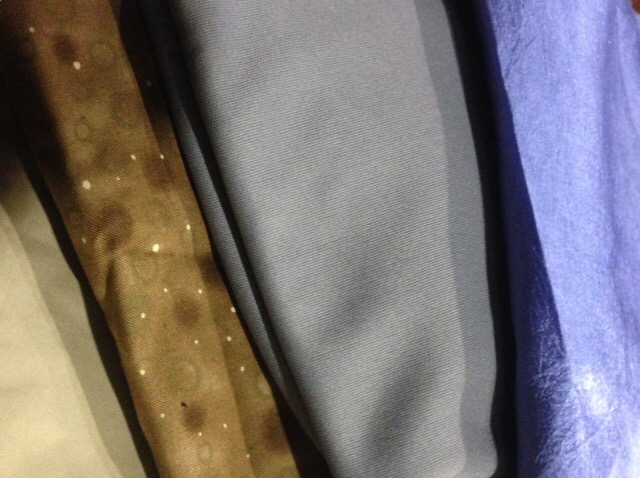 Box after box. In the warehouse again today. I must have opened three dozen boxes, trying to weed out the stuff we don’t need and take it to Goodwill.  I used the box cutter and tape gun so much that my wrist hurt.

There was a prize, though: We got a fancy new Krups espresso machine!

Neither Tom nor I is sure where the box containing this espresso machine was between then and now. He raised the question a few times in the past seven years, and I shrugged, having never seen it.

Somehow the box ended up on a high shelf of Tom’s office closet. And when the tree fell and our entire house got packed out, the box was marked “Closet – Storage” and sent to the warehouse.

This wasn’t the only surprise package. I pulled out a bag from a box marked “Master bedroom – closet” and found six bolts of fabric. I stared at it for a long time. I didn’t remember buying it.

Because of where it was, on a high shelf next to some clothes that I only wear in Muslim countries, I can deduce its origins. In 2013, I made two trips to Pakistan and was anticipating a third. These trips always routed through Dubai, where I once lived and had a tailor. I must have bought this fabric planning to get more clothes tailored on the next trip.

The thing is, Pakistan wouldn’t give me a visa for the third trip. I never went. The clothes and the fabric for that trip have been on my closet shelf since the summer of 2013.

It’s hard, though, to donate that fabric to Goodwill. Not because I’ll use it – I won’t – but because it represents unfulfilled potential.

I compromised. I donated most, but not all, of the fabric.

Because you never know. I might get back to Pakistan, or at least Dubai.

Meanwhile, I can drink some really good espresso.