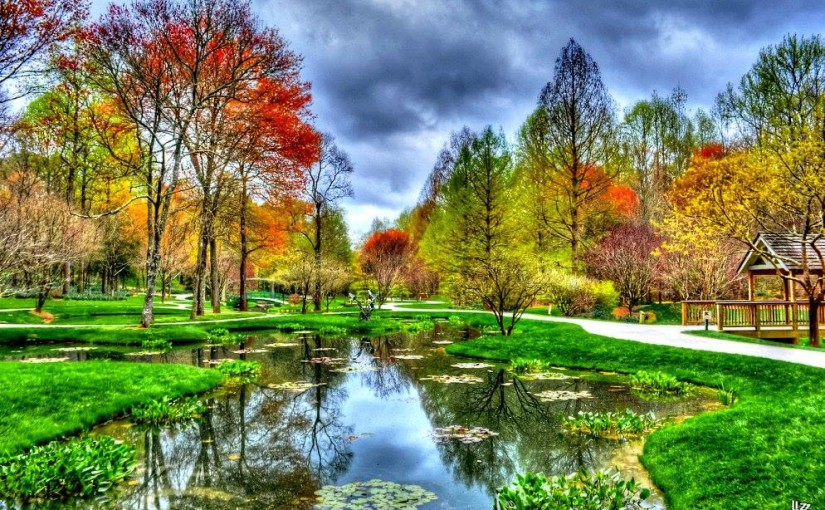 What’s wrong with this picture?

Nothing, according to lots of people who saw it on the Facebook page of Robert Elzey. They called this and similar photos that he shot in a local garden “gorgeous” and “beautiful” and “vivid.”

This was apparent even to a non-photographer, who said, “I don’t like the color vivid like that!! It’s much better natural!”

He replied, “Lisa i appreciate your comment and Kathy’s but i have took 100s of thousands of normal pictures and i do still take a few normal pictures but now i am into Bracketing and High Dynamic Range Photography. I know my style will change as i gone along but i am sure i will stay with HDR on most of my shots.”

Users have a choice in how they adjust the sliders in the software that they use to merge the photos into one. If a little saturation and contrast and sharpening is good, a lot will be great, right?

And then it becomes self-perpetuating. People looking to “do HDR” think that their shots should look as “vibrant” as all the other overcooked HDR that they’ve seen published.

Besides which – people really DO like this overblown look. I have to wonder why. Are we so overstimulated that everything has to look hyperactive just to get our attention?

There are countless examples of good photos ruined by overzealous HDR. You probably have noticed this trend in photography even if you’re not a photographer. The photos look like every colored hair is standing on end.

While cameras in the not-so-distant past were only able to capture a portion of this range in a single shot, now even a phone camera has a built-in HDR function. Generally, though, that function doesn’t do the horrible extremes that bracketing and tone-mapped merges produce.

The technique doesn’t have to turn out this way, which is what I was trying to get across to Robert. It can be captivating for its realism.

HDR is intended to mimic how our eyes see light and color by bringing together a wide range of exposures into a single image. It was attempted as early as the 1850s by Gustave La Gray, who combined two negatives to make this image:

Ansel Adams refined this art in his marvelous landscapes using the Zone System.

Both were cases of art imitating life.

Our eyes miraculously adjust our perception to see details in both highlights and shadows, all in one sweep. This dynamic perception is the equivalent of 20 f-stops on a camera lens – but a camera has, at most, 14 f-stops.

HDR is useful for bringing out those subtle sparkles of light and the depth and dimension of shadows. Here is one I captured and merged as HDR in Booger Hollow, 2011:

Even this seems overdone to me now, and too “HDR” – but it does give some sense of depth and lushness as I wanted. The colors are fairly realistic.

I’m definitely not a purist, but for me, the aim of HDR should be to recreate the feeling of a place. Not send the viewer on an acid trip.

Opinions on this are not unanimous, as this forum on “EarthPorn” shows.

Some photographers believe that “Touched up photos are like good makeup, you really shouldn’t be able to notice it.”

Others, from the same forum, take the line that “It’s art. I hate the notion that there’s a “right” way to do anything. There is definitely room for more heavily retouched photos. You don’t have to like it, but that doesn’t mean it’s wrong.”

If it’s a deliberate artistic choice, that’s one thing. But I think we have grown desensitized by oversaturated photos, and now photographers and viewers think those photos are just “prettier.”

This may be related to the way Americans have come to consume such huge amounts of sugar.

Today’s penny is a 2005. That’s the year Adobe added HDR features to Photoshop.