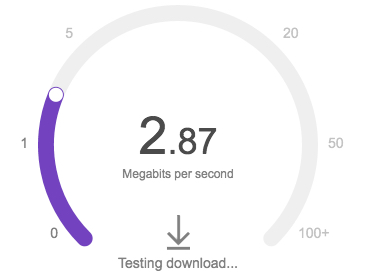 My biggest accomplishment today was that I got a very low level of Internet service for our house.

The service, which tops out at 5 Megabits per second download, is what we’ve had for the past nine years living in the mountains. That’s considered very sub-par by national standards – the FCC defines “broadband” as 25 Mbps download and 3 Mbps upload.

Our measly service frequently runs much slower than 5 Mbps. That number is a maximum, and our provider, TDS, says that running half that speed fulfills their contractual obligation.

When I called last week to have service restarted at the house, TDS informed me that we could now only get “Internet Lite” – at 1 Mbps.

I went into shock.

I saw the value of our beautiful newly restored house drop by $30,000. I saw I’d have to rent an office somewhere and commute because 1 Mbps wouldn’t be enough to work long-distance and make Skype calls.

I had cancelled our phone service in August when we moved out, and since then TDS had put a restriction on new service. I said, “But this isn’t new service! I’ve been a customer for nine years!”

The agent told me there was nothing she could do about it.

Because we’re in the mountains, there is only one choice for DSL, and that’s the local phone company. The other option is satellite, but that has poor quality, has restrictions on data usage, and is very expensive.

After turning this over and over, I decided to call TDS back and ask for a supervisor.

I prepared my arguments before I called. But as I talked to Murlene, the supervisor, I was on the verge of tears. I just could not believe that my entire lifestyle would have to change because of this abrupt restriction in service.

Murlene said she’d make my case to her supervisors. “I’m not making any promises, though,” she said, several times.

I felt sick to my stomach.

When we first moved to the mountains, in 2007, it didn’t even occur to me that slow internet would be a liability. We’d moved here from Timor Leste, where we had to pay hundreds of dollars a month for a speed of 64 KILOBITS per second – in other words, 6 percent of 1 Mbps.

So in our first years here, 5 Mbps service for $30 a month seemed miraculous.

By 2012, we’d cancelled our satellite TV because we got all of our news and entertainment via the internet.

But then everyone else caught on. The demand on the DSL line from our neighborhood grew and grew until, by 2015, we could no longer stream movies on weekend nights.

Luckily, a guy in our community developed a router that improves the quality of your existing Internet so that it can smoothly handle greater demands. With the IQRouter, our 5 Mbps was good enough for movies again.

Still, even at 5 Mbps, we are among the 10 percent of Americans – 34 million people – who don’t have access to broadband that meets the FCC definition. Our community is studying the possibility of installing fiber at our own expense so that we’re no longer captive to the phone company providers.

“Rural Americans are about twice as likely as those who live in urban or suburban settings to never use the internet,” says a recent Pew Research report.

The digital divide creates a serious handicap for rural residents. It leaves us behind in education and in the economy.

I got lucky. Murlene called back to say that TDS will restore us to our former level of 5 Mbps service.

Six months ago, I wouldn’t have thought that 5 Mbps could be something to celebrate.

Today’s penny is a 2015, the year that streaming music became the largest source of income for the Recording Industry Association of America.