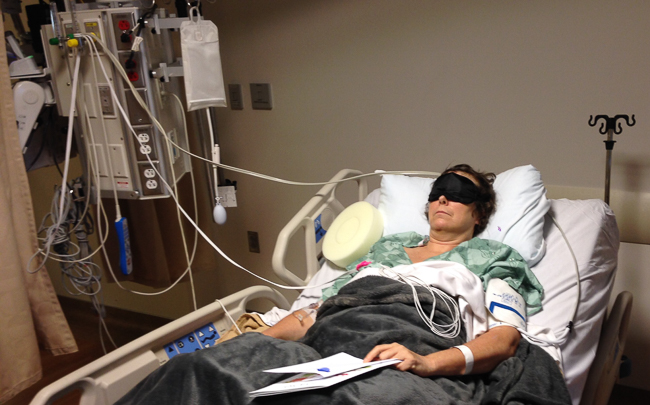 When my mother was dying, during the last period when she wasn’t really talking coherently, my sisters described how she was really restless and struggling … A thousand expressions passing across her face in a short time, even in her sleep, as she physically groped for and asked questions directed to things and people long gone. Clearly she was experiencing a lot of emotional pain, although there were also moments of great calm.

We deduced that she was working through unresolved anger and emotions that had accumulated throughout her life. That she really had to go through that process in order to die.

I have consciously experienced something similar in these last two weeks, both waking and in dreams, with very vivid visuals. All these random pieces of my life floating around that I am reflexively trying to lasso up and either throw into the recycle bin, cause to evaporate, or somehow gather into a more coherent whole. This sorting process seems to go on pretty much constantly.

I think that in November my brain had reached its limit, and hit the emergency brake rather than colliding head-on with the ultimate brick wall. It tried to warn me, but I didn’t respond decisively enough.

An enforced rest, the way I used to get bronchitis or depression when I had overdone it.

My friend Kimberly, who has known me for 30 years, calls it “The Great Brain Rebellion” and she is drawing cards for me to illustrate the concept:

I think we probably all need to do some level of brain cleansing on a regular (daily) basis. Sleep is of course the natural way to do this, but who ever gets enough solid sleep? This is why holistic health care practitioners all seem to recommend meditation.

I am more physically active every day, and take care of more of my own needs every day.

I’ve been able to answer some minor work emails and do little things like bank transfers for staff. I have made phone calls to doctors, nurses, insurance  company, etc. But there’s a heavy brain tax to perform even such minor acts, so I am not able to do much socializing other than some occasional emails.

It’s just been hard to focus on much other than staying alive and staying comfortable.