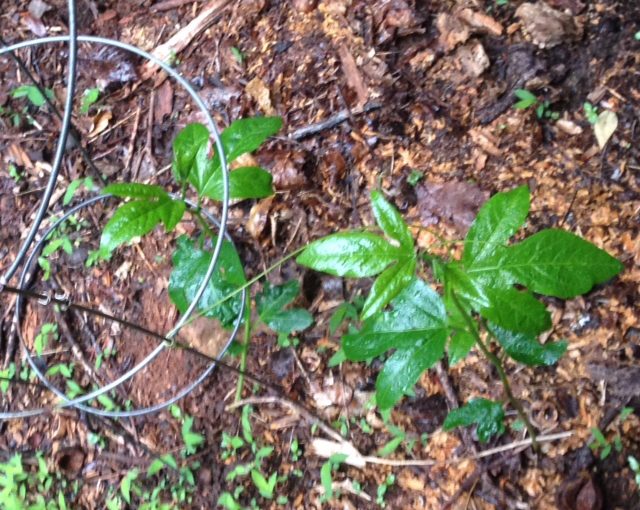 Yesterday, I noticed that I had eight passionflower sprouts up in the yard. This is cause for great celebration, as passionflower not only has a splendid flower, but is the most reliable herbal remedy for insomnia.

Passionflower loves to climb, and gets thick and fruitful if it has something to climb on. So I have three round trellises for the yard.

When I saw the new sprouts, I moved the trellises near to them. I couldn’t quite cover all eight sprouts with the three trellises, because passionflower really likes to sprawl. So I placed them as best I could.

This morning – only 16 hours later – I discovered that a plant had grown a tendril and reached out MORE THAN FOUR INCHES to grasp and twine around the trellis.

See featured image above – that diagonal green line in the center of the photo? The one that has firmly wrapped itself onto the trellis? That wasn’t there yesterday.

There’s a word for this miracle. It’s called thigmotropism – a plant’s response to touch.

How the heck does a plant do this?

Well, scientists have learned that the tendril actually waves around in the air until it touches something, and then grabs on.

The process of winding around and hoisting the plant is a whole complex mechanism. It’s so astonishing that scientists developed a mechanical spring imitating it and got a patent.

Yes, plants have a sense of touch. A very sensitive sense, in fact.

Some plants are 10 times as sensitive as human skin. They can respond to a thread weighing just 0.00025mg.

Well, yes. They have phototropins – light receptors – in some cells. This is how they know to turn toward the light.  They can also sense red and blue light – and UV light.

They don’t see pictures. But they see colors, they see directions, they see intensities. But on a certain level, plants might think that we’re visually limited. Because plants see things that we can’t see. They see UV light and they see far red light, and we can’t see that at all. So I think we can say that plants see.

They can also smell, taste and hear. Let’s explore that another day, shall we?

Today’s penny is a 2012, the first year I transplanted the “weed” passionflower to our property.

2 thoughts on “How do they find the trellis?”