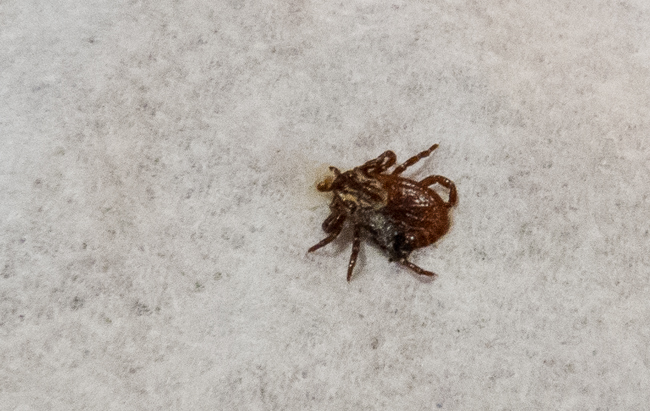 No matter how hot it gets, I wear long pants and a hat when I hike through the woods. Along with bug spray, this is my protection from ticks and chiggers.

It’s not enough, though.

Chiggers are the larvae of mites, and they hang out near the ground where it’s moist. They jump onto your clothes and then crawl around on you until they find skin.

They like to grab onto ankles, lunch behind the knees, or take up residence in your crotch. They inject enzymes that kill your tissue and then they eat the dead tissue.

While the bites will make you itch like crazy, the worst you’ll get is a lot of red spots. (If you’re a guy, though, you might get “summer penile syndrome” which will make it difficult to urinate for a couple weeks.)

Ticks are a different story.  They bite to get a grip so that they can gorge themselves on your blood, and in this way they pass diseases to humans.

You probably already know they carry Lyme disease, which brings on fever, fatigue, stiff neck and headache. But there’s a bunch of other nasties that they can host, according to WebMD:

That’s not even a complete list, according to the Centers for Disease Control – there are 15 tick-born diseases all together. The worst is deer tick fever, powassan virus, which is untreatable and can kill you.

Despite their horrific-sounding names, the other diseases can be treated. But antibiotics don’t always work for Lyme disease, and if you don’t treat it pronto it can become a very debilitating illness, affecting the nervous system and heart.

So I was pretty freaked out to find a tick feeding on me today.

I took a shower right after yesterday’s hike, so I’m not sure how this guy ended up attached to my right side. Likely he hitchhiked on my clothes or shoes. But he’d probably been there awhile.

I pinched him off – which I later learned you’re not supposed to do, because their saliva seeps out onto your skin. Use a tweezers to pull a tick off your skin.

Now the waiting game begins. It can take several weeks before the symptoms of these diseases show.

The odds of whether a tick carries disease depends on where you live. In some parts of the U.S., it’s high.

Save that tick in a plastic bag. You can just stick in the freezer and wait to see if you get a disease. The dead tick can help diagnose your illness.

Or, if you’re just really curious, try to identify which kind of tick it is. The folks at TickEncounter have a helpful guide – and they even want you to submit a photo of it as part of a crowd-sourced effort to track tick populations.

Mine appears to be a deer tick in the nymph stage, but I’m going to send in a photo just to be sure.

As for prevention – my pants and DEET alone aren’t enough. The CDC recommends using products containing 0.5% permethrin on your clothes as well. They also say to wash clothes in hot water and dry them on high heat.

If you have a dog – well, brace yourself. You’re supposed to check its fur all over, every time it’s been outside.

A walk in the woods doesn’t have to be deadly. It just takes a little extra effort.

Today’s penny is a 2012, the year that the U.S. Army began issuing permethrin-treated uniforms to its soldiers.