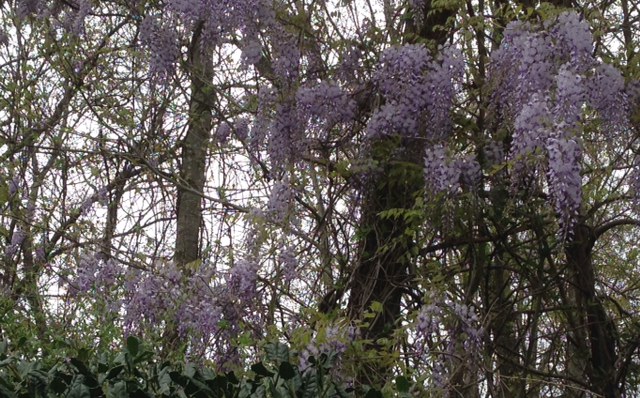 There it is – all along the highway and byways, from Atlanta into the North Georgia mountains – that only-in-springtime color combination – lavender and lime green.

It’s the palette of perfume, misty rain and thrusts of life.

It’s the color of invasion.

It’s the war of wisteria against the youngest, freshest leaves of trees.

Wisteria looks so innocent and so romantic. It catches you by the eyes and throat in a twining sweet embrace.

We had a trellis of wisteria on the house I grew up in. The sight and smell were heavenly, and more importantly they made my mom happy.

It wasn’t until I moved here that I learned wisteria is a problem.

The Chinese and Japanese wisteria that you see hanging from trees and along the roadside is a non-native, invasive species. Brought to America in the 1800s, it takes over and strangles forests.

Yes, those pretty purple vines are very aggressive. They block the light, swallow the water, crowd out saplings and can strangle even mature trees. So gardeners, please don’t plant the stuff. It’d be like planting kudzu.

There’s an alternative – a native, American wisteria that stays in check with somewhat less effort.

Today’s penny is a 2008, the year I learned about non-native invasives in Georgia forests.