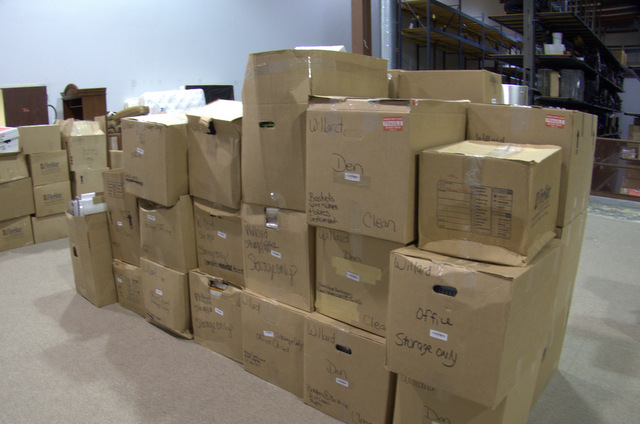 I can’t shake the strangeness I feel – in the warehouse, at dinner, driving home, recuperating from it all.

We spent the day in Cartersville, which is only about 40 miles, but it felt as though we went on an exotic journey.

The town itself is like a set in a Wild West movie. Pawn shops and dried dirt, streets with a scrabble of wood frame buildings, pickup trucks gunning down the four-lane.

The warehouse of ProFire is new, clean, and warm. ProFire handles insurance jobs and it’s been successful. The majority of what we own has been stored here in boxes since it got packed out in August.

Today’s goal is to sort our books – 29 boxes of books. I made arrangements with Friends of the Bartow Public Library to pick up whatever we are ready to part with.

The ProFire staff put some thought into accommodating us, even though no one’s ever requested this before. They’ve brought our boxes to an open space and set up tables for us. All around the perimeter of this open space are piles of other people’s stuff. Chairs, couches, tables, bins, and boxes, just like ours.

Tom and I each have a table. I lift some boxes onto the tables and we set to work.

Halfway through the sorting, my eye falls on a brown couch. Suddenly I realize that it’s MY couch. Our recliner couch. The couch is trashed. It got covered with debris when the oak tree punched holes in the roof. The bulk of the drywall from the ceiling fell smack onto the couch.

The couch will not return to our house. We claimed it, got reimbursed for it, ordered replacement furniture.

It’s just a couch, but it was a place of rare comfort during a particularly intense six months. Until I saw it in the warehouse, I didn’t realize that I hadn’t let go of it.

Here it is, wreckage, soon to end up in a landfill.

It’s unsettling to see my couch like that. A shock to realize that I could have died there, if I’d been sitting on it when the tree fell. It’s a shock how vulnerable we are, as frail as sticks of wood with fabric.

Our objects don’t protect us.

I remember seeing my Honda Civic, in a junkyard after it was totaled in a freeway accident. No front end left.

I leaned over the couch, stroked the fabric, laid on it. Felt bereft. Like seeing your favorite stuffed animal lying by the side of the road in the rain. Maaaaaaaaa!!

Like putting your books into boxes to give away to a library sale in a town where you don’t live.

You know in the end it will be OK. That whatever was yours will just go somewhere else, even if it takes years to dissolve.

In the meantime, you just have to get through it.

There are books you were once in love with, but fell out of love with as you read other authors and took on new ideas. We got rid of a lot of grad school books. I kept Chatterjee and Chirot, Tom kept Kristeva and Clausewitz, we both dumped Hobsbaum.

There are books you keep because they are at the level of Faulkner. The Faulkner books are the only ones we kept that meet that standard.

There are other writers who, while not Faulkner, are so good that you keep their books out of sheer reverence. Italo Calvino, Jim Crace, authors you could take up at any time and feel that humanity should and will continue.

There are books you bought in a foreign country that were printed long before Kindles existed and have lots of photos and illustrations, so you keep these because if you don’t they are gone forever, just like the days when you roamed around those countries.

There are books that you didn’t fully understand at the time but you loved them and then as you got older you remembered phrases or scenes from them and then you understood. You might not need to keep them all but you have to keep a few.

There are books that you will never part with, ever, because you’ve had them since you learned to read, and you can’t imagine giving them away even if you become a refugee and have to carry them in a bag on your back.

Every book has memories and carries something you feel, and stirring up so many feelings and memories in a single day is hard to process because it goes by so fast. You might ask Tom whether he’s read it, what he thought. You might linger over it, tell a story about when you bought it or when you read it.

You feel and remember when you hold each book, and whether you give each book a few seconds, or a minute, the whole period of time when you read it floods over you.

And then the 16 Donate boxes go away and the books get sold at a book sale and go to new houses and the money goes to the library and they buy more books.

And after you leave the warehouse you go out to dinner and have Purple Skyy cocktails and talk about the books some more. And you talk about what might happen in 2017 that could be a lot worse than 2016.

You talk about what you’d be willing to die for.

And after dinner you drive home 40 miles and almost cut in front of somebody in a truck, but you don’t and you get home safely. And you sit and talk about life.

It feels very strange, how things come and go.

Today’s penny is a 2005, the last time that we sorted our belongings and got rid of a lot of them. It was also the year that we bought the green sectional couches that we replaced with the recliner.

2 thoughts on “In the warehouse”