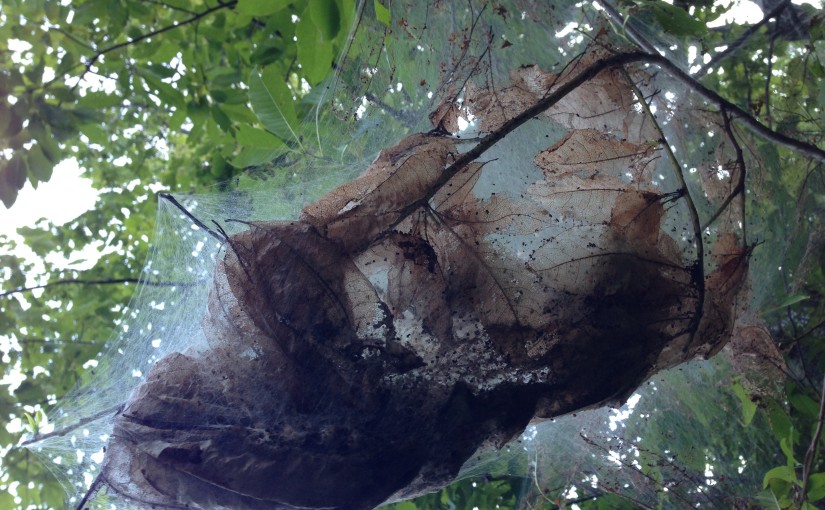 Some of my fellow residents in this wooded mountain community have been concerned about the number of “webs” in the trees this summer.

They’re referring to “webworms,” which look like thick masses of spider web but are actually cocoons for a whole nursery of caterpillars.

One woman attacked with vigor: She swept and cut them off the limbs of her trees. People have been known to take blow torches to them, which I guess is better than spraying them with toxic chemicals.

The very idea of trying to tidy up nature in this way was at first comical, and then struck me as a bit pathological.

We all chose to live in the forest, and the bugs and bears are part of the forest. We’re not. As far as nature is concerned, we humans are a small and pretty insignificant minority here.

There ARE a lot of webworms in the trees this year, whole groves of them. (At first I thought they were tent caterpillars, but learned that’s a different animal – they appear in the spring, and in the crooks of trees.)

The fall webworm is the adult Hyphantria cunea, a moth which creates the webbing around the foliage on the ends of branches as they eat.

This web creates a safe place for larvae to go through their 11 stages of growth. Left alone, the webworms are generally controlled by wasp predators.

It’s just part of the rhythm that rocks around us, part of why living in the forest is so absorbing. We are captive to the web of this ecosystem, and have the privilege to watch it be woven anew and differently each year.

Every season brings an abundance – of something. It’s always fun to see who will have a big year – and what the effect will be on the food chain.

Two years ago we had voluminous rains that went on and on, and everyone complained. But the result was an enormous crop of chanterelle mushrooms, the likes of which had not been seen in 20 years, according to a local mushroom-hunter. We harvested them in five-pound bagfuls and didn’t make a dent. These are mushrooms that sell for $15 to $20 a pound for in the market, when you can get them. We used them with decadent abandon as though they were mere garlic, and hooted with glee at our good fortune.

Last fall we had a huge crop from the nut-bearing trees; this spring we had a huge crop of squirrels and bears. The nuts dented my car, but that was nothing compared to the delight of watching squirrel siblings chase each other up and down their nest tree, and seeing a momma bear herd her two roly-poly fuzzball cubs off the street and down a neighbor’s driveway.

Perhaps this year, with the abundance of caterpillars, we will attract a shocking flock of whatever birds feed on them.

Today’s penny is a 2013, in memory of the Year of Chanterelles.