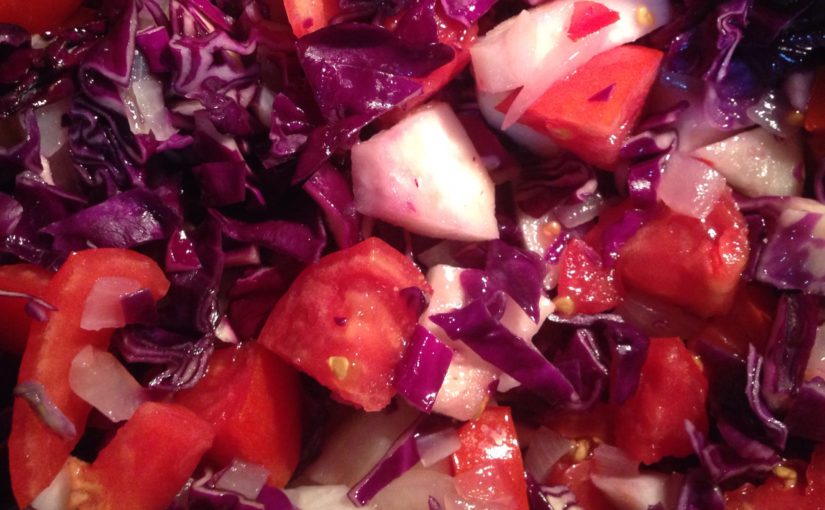 It just about kills me to waste food. I grew up with Catholic guilt and “the starving children in Africa” clanging in my head – but the real pain comes from the thought of how much labor, non-renewable energy, and time went into producing that ear of corn or that chunk of tofu and delivering it to my frig.

To waste all of that seems an insult to the earth and to farmers.

So I organize my cooking around any ingredient that’s vulnerable to spoilage. I’ll change my whole schedule around to cook and make sure that I don’t have to end up throwing out food.

When I woke up at 4:35 a.m. today, my refrigerator full of veggies was calling to me. None of the veggies were close to spoiling – but I’m about to leave the house for vacation.

I was chopping before 7 a.m. A whole head of red cabbage, an entire bag of celery, two turnips, one and half onions, three red potatoes, two large tomatoes and a bunch of cherry tomatoes. I threw in garlic, cooked kale, beef broth, leftover chard and kale broth, and fresh rosemary and oregano from the deck garden.

It reminded me of stone soup. You remember the story of stone soup? The weary travelers who were hungry and stuck in a town where no one trusted each other? They set up a cook pot with just a stone to cook in the water. They invited the town to partake of this highly delicious soup. And the soul was made delicious from the collective flavor of each individual ingredient contributed by a wary neighbor

Stone soup takes a little knowledge and a little faith.

Then you have to have faith. That these fresh veggies, when thrown together, will harmonize and become something delicious.

Today’s penny is a 1985. That’s the year that I first wrote down a recipe for a dish I had improvised, because I feared I could never improvise something that good again.

I never used the written recipe, and I never stopped improvising dinner.