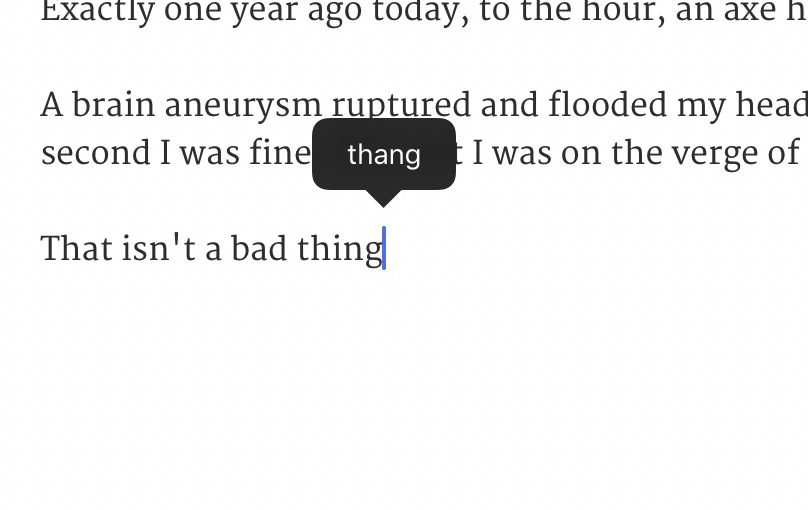 I was happily writing away on my iPad and typed the sentence, “That isn’t a bad thing.”

A word suggestion popped up: “thang.”

You read that right. Autocorrect suggested a facetious mispronunciation to replace an actual word. There’s my proof – the featured image above is an unaltered screen shot.

I really couldn’t believe it.

Then I looked down at the auto-suggest tab.

I found that outrageous as well. However, the origin of “thingy” is surprisingly long ago – 1880s, according to Dictionary.com.

The actual word I had typed, “thing,” was only offered in quotes in the far left on the auto-suggest bar, which is what happens when you’ve typed a word that the program doesn’t understand and wants to replace.

OK. We really HAVE gone too far.

The experience was surreal, disorienting, a little Orwellian. Why would I be prompted to use a fake, slang word to replace a real, normal, dictionary word?

I’ve pondered this when autocorrect capitalizes every use of the words Cubs and Giants. What?? It’s not like I’m a sportswriter who has opted to capitalize those words myself.

Are professional sports teams more important than the correct spelling of little bears and big people?

The bigger question is: What’s the long-term effect on kids who grow up with computers that suggest “thang” to replace “thing”?

Today’s penny is a 2014, the year iOS 8 launched with a little thingy bar to give you word suggestions.

One thought on “Yes, “thing” is an actual word”