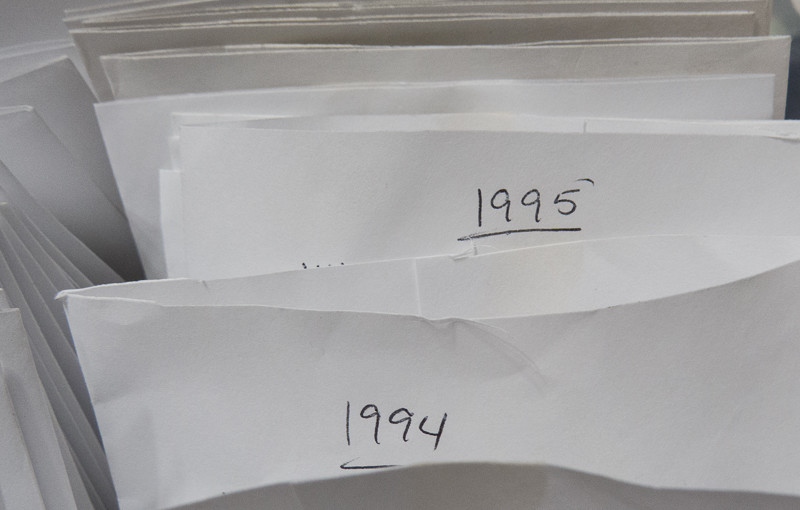 Brits use the term “sorted” in a way I’ve come to like. “Well that’s sorted” refers to a problem that’s been solved, an activity that’s been organized or a task that’s been accomplished.

I like to sort things. I like to solve problems most of all – it’s one of my favorite things in any job. But also in play: The games that I like are all about sorting things into their proper place, such as Sudoku, mahjong, or solitaire. When I lived in Afghanistan, I would spend three or four HOURS at a time playing solitaire and mahjong. Everything was such a mess … I wanted to tidy it up, compulsively, and I couldn’t tidy up Kabul.

But a finished game – all the cards, tiles, or numbers in their rightful boxes – makes me feel that all’s right with the world.

So once I got started on sorting the pennies from these rolls into the year that they were minted, it got really addictive and pretty fun.

Like any mundane task, I got faster and more efficient at it the more that I did it. Now I can sort a roll of pennies, that’s 50 of them, in maybe 10 minutes. A big jumble, all tucked away into their envelopes, one for each year. Why is this fun? Well for one thing, it’s like a very cheap kind of gambling. When you break open a roll, you never know what you’re going to find. You might find a rare penny, or a penny minted in one of the years that you don’t have yet, or one that has some distinctive characteristic.

Each of these older pennies is like a little time machine. It makes me think back to that year and what I was doing, or what other people in my family were doing.

Handling the pennies also elicits a strange visceral response, in that it makes me physically aware that many thousands of people, perhaps millions of people, have handled this coin. There is no way to know where it’s been or who has touched it.

That makes each one a little bit magical. (And kind of dirty, but more about that in another post.) Then each one gets tucked into the envelope for its particular year. Some years bulge, others are slender, but they are all in order in their box. Life is very messy and chaotic and full of change. So with the pennies tucked away in their little envelopes, somehow I feel that I’ve sorted life out.