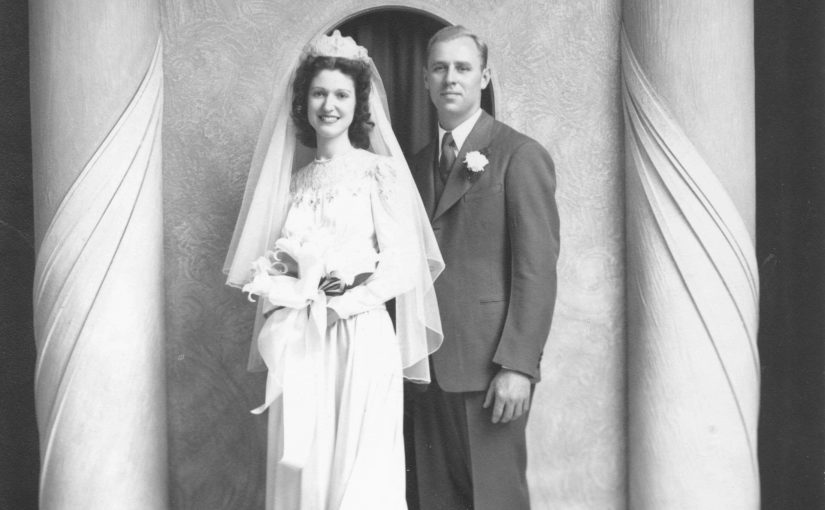 June 11, 1946, was a Tuesday. There were so many weddings that year, with all the GIs returning from the war – churches were booked solid.

So Peg and Walt got married on a Tuesday morning at her local church, St. Joseph’s in Monroeville, Ohio. I wonder how many people took off from work to come to it?

The church was decorated with white peonies, and the bride carried calla lilies and a prayer book that her grandmother had also carried on her wedding day.

Walt gave Peg a sterling silver rosary for that day. I wonder what happened to it?

It was a single-ring ceremony, which means that only the bride put on a wedding ring. Walt was a plumber, and never wore a wedding ring because it would have been a hazard in his work.

In those days, small-town newspapers carried a write-up with every single detail of the weddings on the Society page. Yet the details just prompt more questions for me. Peg’s dress (which was borrowed – unknown to the Society page editor) was white satin with lace on the yoke and upper sleeves, with “a detail of embroidery and seed pearls joining the two fabrics,” the Norwalk Reflector Herald noted. “Her fingertip veil was caught to a tiara of seed pearls.”

I wonder if her father walked her down the aisle, or even attended? He had already been confined to a state mental hospital a few times. Such things were not mentioned in newspapers then unless the person committed a violent act.

The bridesmaids’ dresses were in marquisette – one aqua, one yellow – and they wore “long white gloves and a sweetheart headdress of matching marquisette,” the Sandusky Register-Star News reported.

I had to look up what marquisette is – Webster’s says it is “a sheer meshed fabric used for clothing, curtains, and mosquito nets.” Hmmm. A family friend sang “Ave Maria” and two in-laws sang “On This Day O Beautiful Mother.” I wonder if it was an organ or piano that accompanied them.

Afterwards, a wedding breakfast just for immediate families was held at the Daughter of the American Revolution House. I bet they served Alma’s kuchen (coffee cake). They went on a honeymoon to Mackinac Island in Michigan, and when they came back they settled in an apartment on Prospect Street in Sandusky. Not sure why, but the newspaper accounts didn’t include where they went on their honeymoon, though they did include their full street address.

It was hard to find apartments then, too. They got this one on Prospect because of connections of Peg’s sister. That wasn’t in the newspaper either.

Nothing of real importance to a marriage is in a wedding write-up.

In later years, I remember Mom saying how naive they were when they got married. And that marriage was a lot of work. I never doubted, though, that every bit of effort was worth it to them.

If my parents were both still alive, it would be their 70th wedding anniversary. Dad would have been 96 in August this year, and Mom would have turned 93 in September.

Today’s penny is a 1996, the year of their 50th Anniversary. Thanks, Mom and Dad, for modeling respectful love.