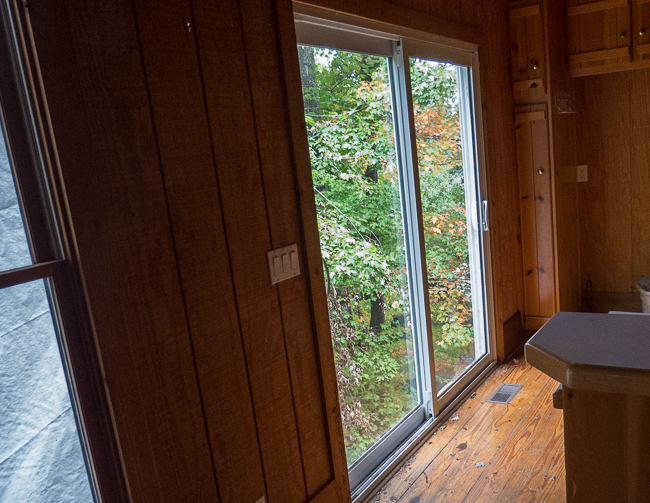 I stopped by Azalea today, because the decks have been demolished and I wanted to see how that looked.

As I turned the corner onto our street, the first thing I saw was that the driveway was consumed by a big yellow dumpster.

It’s an odd feeling to see a dumpster in front of your house, and realize that it’s there to carry away the pieces of wood formerly known as your deck, where you spent many hours of happy times. I could also see from the street that the decks were gone. It gave the house a strange, flat appearance, a kind of crew cut that left its skin exposed.

When I opened the front door, at first everything looked the same as I last saw it: gaping holes in the roof, windows draped by the tarp, debris and the destroyed grill littering the living room.

As I stepped toward the kitchen, though, the sight above hit me hard.

The sight of nothing.

Beyond the sliding glass deck doors, the house ended abruptly.

Without a deck, the house seemed so much closer to the trees. The outside was inside. The vertical lines of the tree trunks were uninterrupted by a deck.

The closer I got to the glass doors, the more unstable I felt. I couldn’t get right up to them; it was too frightening. I felt that my weight alone would tip the house over and send it cascading down the side of the mountain.

After a few seconds, just long enough to take snapshots that I could mull later, I ran out and headed downstairs to my office.

The view was remarkable.

Downstairs hasn’t really had a view the way the upstairs has, because the deck was inevitably part of the view on all sides. The deck railing blocked more than half of it.

Now, there is nothing between the house and the woods.

I walked slowly up to those sliding glass doors that used to lead to the lower deck. It didn’t seem nearly as scary because I could feel the concrete foundation below my feet.

I opened the door and looked down.

I was shocked by how close the ground was. Just a half-dozen imaginary stairs to the red Georgia clay. Not scary at all. I could even have jumped out.

And the outside came in. My office felt bigger with the unobstructed view. The glass doors were no longer part of the wall but instead were a portal to the valley, as they were meant to be.

Why did we have a lower deck at all? I wondered.

It served no purpose except to hold storage bins of unused stuff. We never spent time out there, except that Tom would go out there to smoke when it was raining and he was working in his office.

Smoking and storage – what a weird barrier between my life and nature.

The openness really affected me. It made me feel differently about my office and the house.

Made me excited about the possibility of redesign, remaking the house into something that is fully connected to natural beauty, more in keeping with the future I want.

When I went back upstairs, I mused about how the great room could be different, how the loft could be redesigned.

I turned the lock on the front door and pulled hard to make sure it shut firmly behind me.

Today’s penny is a 1998, the year that the developer first submitted plans for our house to our community’s architectural review.