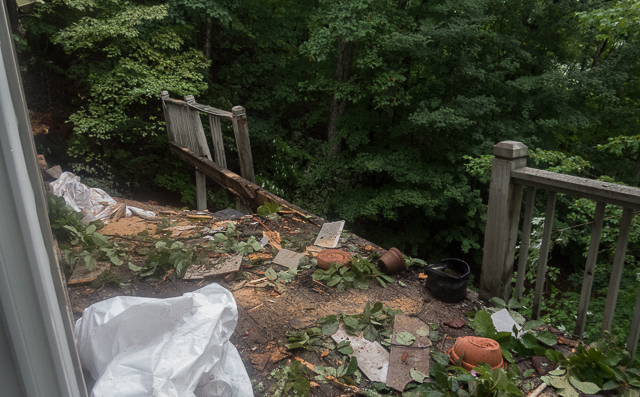 I could hear the chainsaws across the valley a little after 8 a.m., and I knew it was at my house.

I sat on Sara’s deck, looking out into the obliterating mist, and cried.

She came out and sat with me. We talked and drank coffee. Finally, I got dressed and drove to my house, where a 10-ton oak had fallen and punched holes in the roof, wall and deck.

I made the crew stop working while I sat in the driveway and discussed the plan with the tree service boss, Steve.

He explained again why a crane wasn’t possible. He showed me that they had tied off the fallen tree with a rope to a large tree nearby. He said they’d do everything they could to preserve some of the deck.

My fear was that the whole side of the house would be ripped off when the decks went. Steve said that, though possible, it was unlikely. We went back and forth. Finally I said, “OK. Go ahead.”

We watched from the hillside just above the tree’s roots. Despite how healthy the tree had appeared, its roots were “like peanut butter and jelly,” Mark the climber had told me.

Now Mark was working his way across the roof, sawing off limbs and tossing them over the side. When he got to the midpoint of the roof, he warned the crew that the tree could roll off the house at any time. He asked for the 36″ saw.

They had a plan. The fallen oak was tied to a tall, strong, downhill tree. When the oak began to roll, the crew would let the rope loose and with any luck, the tree would miss the deck.

A tree that big, though, is unpredictable. Its mass isn’t evenly distributed, as the huge limbs branch off from the trunk. Steve was still resigned to the idea that both decks would go.

It began to rain. A steady rain. I stood there under the shelter of the other large trees, next to Steve, riveted with suspense. John, the manager of the restoration company that will rebuild the house, joined us, and asked about Mark.

“Is he tied?” John said anxiously. “Yep,” I told him. Mark checked his safety line each time he moved across the roof.

He was anchored to another tree, in the front yard, a tough pignut hickory whose nuts have rained like bullets on my car every other autumn. I knew that tree would hold him.

Mark cleared the big limbs and began to work the trunk. He sawed chunks only a foot long, trying to reduce the bulk of the tree as much as possible before it rolled.

Even those relatively small chunks were like anvils – they broke right through the deck and railing as he tossed them off the side of the roof.

I told myself it didn’t matter; the top deck has to be rebuilt anyhow; but it’s hard to watch your house being destroyed.

Finally Mark got to the place where the tree’s lowest branch had come through the living room ceiling. That broken limb was holding the tree to the house.

“It’ll go on this cut or the next,” Mark called to us. He lowered the saw.

There was a tremble and a groan. And then it went.

The power of that oak blasted through the top deck and ripped it to shreds. It kept going – right through the lower deck – all the way to the ground. The crew had done well, though. Because of the precautions, only the far end of the lower deck was taken out. A couple of windows broke, but the side of the house was intact.

Could have been much worse.

Could have lost all of it at once. Tree could have landed a little differently and left the house without a roof. Could have happened during a thunderstorm. Or during one of the winter storms that leave us iced in for a week.

The house could have been totaled.

And I could have been living in a country without regulated, reliable insurance.

Or been a refugee from a bomb, instead of a tree.

Mark said he didn’t understand why the tree had continued to stand for the last six months, with its root ball gone soft the way it was.

Maybe plants talk to each other. Maybe the herbs on the deck said to the tree, Hey dude! Hold off for awhile there, OK? She really loves us and she’s having a pretty tough year.

And could you wait until she’s not at home?

Today’s penny is a 2015, when the first of these gifts of nature was given to me.