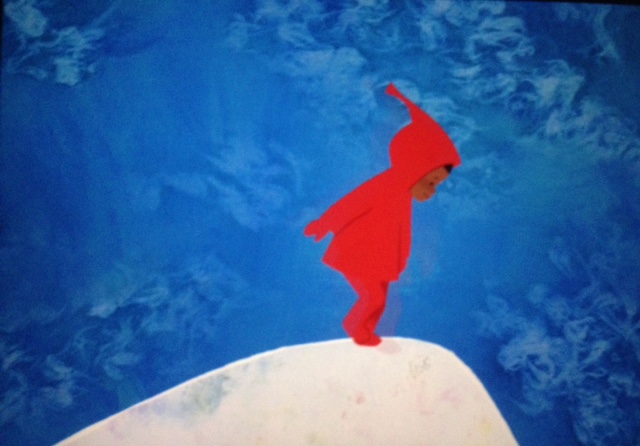 When I was very young, just starting to read, I got a book called The Snowy Day by Ezra Jack Keats.

I kept it for many years, even after I was reading long novels with no pictures. I think Mom finally got rid of it, not understanding how such a childish book could still be valuable to me.

Even at the age of 6, I understood that the book was very different, very special.

It is not about blonde princesses in castles. The main character is a boy who’s black and lives in an urban neighborhood.

It does not have a thrilling plot line. The boy wakes up, sees that it has snowed, and goes outside to play in the snow. That’s it. That’s the whole book.

Yet the book mesmerized me because of the illustrations.

I didn’t know the word for it then, but I noticed the style of the illustrations. I understood that the style was distinctive.

It was simple, but textured and visually rich. Basic forms, strong colors, clean composition, and yet every page conveyed an entire scene, with all the sensory engagement and emotion of each scene.

The Snowy Day, published in 1962, won the Caldecott Medal for the most distinguished children’s picture book in 1963. It is a classic.

I remember going to the library and asking for other books by the same author. I was so little that I didn’t know how to pronounce “Ezra” or “Keats.”

Recently I saw on Amazon Prime that an animated video series had been made of The Snowy Day. I was excited, but I couldn’t imagine how this brief book could be stretched into an entire series. This weekend I finally watched the first episode.

It made me sad.

The animators did their best to hold to Keats’ style, and the writers tried to stay true to Keats’ goal of diversifying children’s literature. But they failed to bring it to life; instead they crushed its spirit.

The magic of the book’s art is that it captures a single, crisp moment from each scene. Stretching those moments into entire scenes dilutes the effect.

Creating new scenes and inventing a dramatic tension is necessary for the medium of video, but that’s why it failed. Turning it into a video weakened rather than enriched the story.

The diversity of the book was influential because it was unselfconscious. It was simply a beautiful book about a boy and snow.

The mere fact that the main character is a boy with dark skin who lives in the city, instead of a white boy on a farm, taught me an important lesson that stayed with me for life. But the lesson is not overt. There’s no lecture about how great diversity is.

The video stretches diversity to an extreme that seems more likely to alienate children rather than entice them. There’s a hard-working female Chinese merchant, a very tidy and friendly Arab merchant, a Latino gang that does nothing more harmful than throw snowballs, and a little girl and her mother who are Jewish and buy Hanukkah cookies at the bakery, everyone living in perfect supportive harmony.

The plot is stretched into a Pollyanna fantasy complete with a productized acapella song voiced by Boyz II Men.

The video’s tweezered population, with its perfect mix of race, ethnicity, age and gender, ends with a party in which all the characters delight in each other’s generosity and cultural food selections.

God knows we need positive images of harmonious communities right now. But geez…. didn’t we get past this level of tokenism about 25 years ago?

Even 6-year-olds know the difference between a real story and a fairy tale.

If you’d like to capture the spirit of the original book in digital form, check out the read-aloud version on the Ezra Jack Keats Foundation site. The illustrations are gently animated and the original text of the book is read aloud.

Today’s penny is a 1996, the year Viking published The Snowy Day as a board book, 80 years after Keats was born. He died in 1983, so mercifully he won’t have to see the Amazon video series.