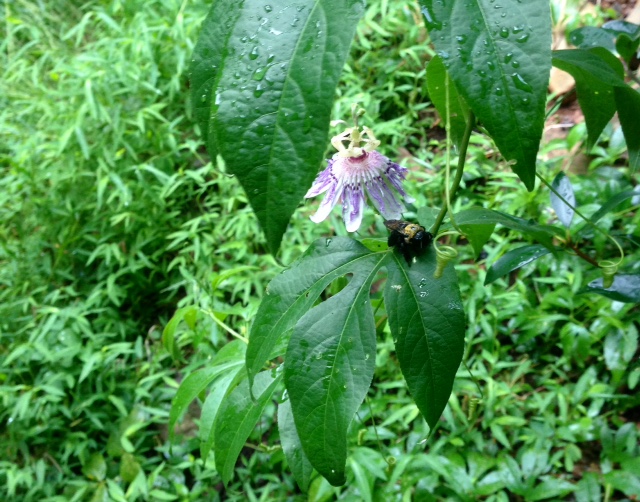 One of the reasons I grow passionflower is to serve as a bartender to bees.

They love the rich nectar of this showy blossom so much that they get drunk on it.

The first sign is when the bee simply sits on the barstool without moving. Next, they get disoriented and can’t seem to navigate the bar, so they go to the bathroom. And finally, they are so drunk that they wander away from the bar and can’t find their way back. Tonight three of them just laid there on the passionflower in the pouring rain.

After the rain stopped, I gently prodded one to see if it was dead. It rolled over, sloppily, and kicked its legs a few times. It wasn’t dead. It was still there the next morning, but it had staggered to its feet.

I am not the first naturalist to have observed the effect of passionflower on bees. In 1853, Francis Channing Woodworth noted,

I regret exceedingly to be obliged to announce the fact, that bumble bees are sometimes given to tippling. It seems that the nectar in the passion flower has an intoxicating effect upon these creatures, and that they now and then indulge in excessive drinking, when this beverage is within their reach. Instead of being content with a moderate draught, like orderly and temperate bees, they yield to temptation, and drink until they are quite drunk. They become so stupid, indeed, from their intemperate drinking, that they scarcely can fly home to their nest; and it sometimes happens, that one may see half a dozen of these poor creatures lying on the ground, near the goblet which has so grossly intoxicated them, and entirely unable to stir an inch. The dunces! They are almost as silly as the human drunkards that we too frequently meet with.

Apparently, passionflower blossoms are particularly sweet, and in hot weather the nectar ferments. That makes the bees drunk.

Well, have a look at that flower – doesn’t it just have WOO-HOO written all over it?? This is no laughing matter to the other bees in the hive, however. A bee that manages to make it home without crashing is turned away at the door by a bouncer, researchers say, because alcoholic honey could destroy them all.

The conniving plants, meanwhile, who care only for their own survival, continue to devise ways to draw and keep the bees so that their blossoms get pollinated.

A study at the University of Haifa found that bees prefer nectar with caffeine and nicotine, and so some flowers have evolved to produce nectar with those ingredients.

Flowers may be pretty, but they’re no innocents.

On a sobering note – other kinds of chemicals, like those found in common fertilizers, pesticides and herbicides, can poison the bees. They might act drunk, but they’re actually poisoned.

So if you’re going to bartend, do it organically, please.

Today’s penny is a 2010, the year that the Haifa study was published.