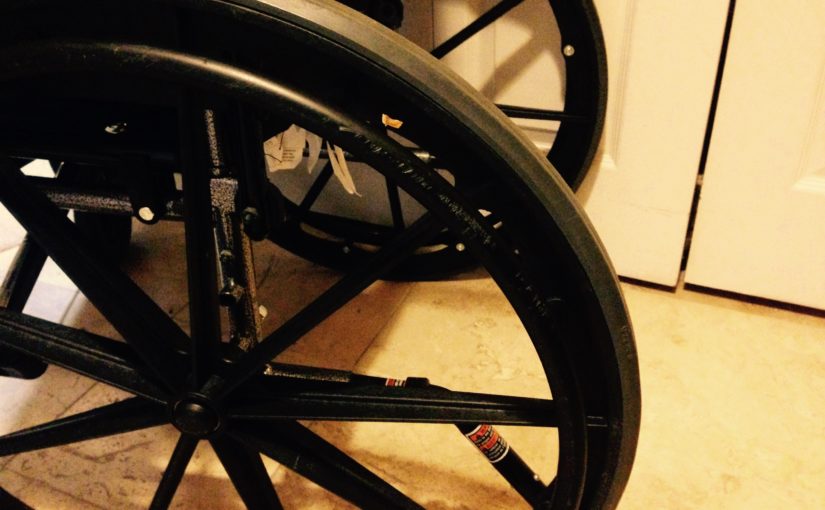 I remember the day Tom got his wheelchair – Aug. 6, the day he was discharged from the rehab hospital. Only a month after his stroke, he could get to and from the chair and a bed, a regular chair, and a shower bench.

The chair was a liberation, a sign of great progress, an indicator that he was ready to be out in the real world.

The staff tied a green ribbon to the handle, so the other inmates patients knew that he was getting out. They said goodbye with envy.

I had learned to wheel Tom around in the hospital. Now I had to learn how to put the wheelchair in the car and take it out.

I was clumsy at it. Even folded up, the chair is big. With a “lightweight” carbon steel frame, it weighs 34 pounds, all of it awkward.

The footrests have to be taken off to stow it. The cushion too. The seat has to be pulled up in the middle to fold the chair. Then you have to pick up the whole contraption and lift-shove it into the car.  The big wheels turn, the little wheels rotate sideways, so it’s not like picking up a box – the parts all move as you’re handling it.

Then you have to fit it into the car.

With Xena, I put the wheelchair in the back compartment, which is a lot easier than getting it in and out of the back seat. But it has to be slid in at the right angle so that it doesn’t shift and bang around when you’re driving, and doesn’t slide out and fall on you when you lift the hatchback.

Getting it out is a little easier, but then you have to unfold it, put the footrests on, and position it outside the door so that Tom could get in and out of it. Make sure the brakes are on!

And then there was pushing him, getting him over bad door jams, figuring out the best route through a restaurant… Good exercise. We’d sing the theme from Rawhide, “Rolling, rolling, rolling….”

I got better and more adept at it over time.  About three months of daily practice will do that.

Tom was using it less even as I improved at handling it. His walking got smoother and more stable and his muscles regained strength. By the time we went to Virginia at the end of October, he hardly needed the chair at all.

About a month ago, fleeing the fire danger, I took the wheelchair out of the back of Xena for good.

Tom can walk a quarter of a mile without strain now, and about a mile or two for exercise. He has a leg brace and a cane, but he walks around the house short distances without those, either.

We still have the green balloon. It hangs inert by its white ribbon off the edge of the mantel, a limp appendage to the buoyant red lava lamp above it.

Today the medical equipment company came and got the wheelchair. It was a big day.

It’s only now that I noticed the racy name of the chair – the Tracer SX5. Sounds like you could do a marathon in it.

I guess we did. A three-month marathon.

Now that it’s gone, I feel so much lighter. Like I’ve lost 34 pounds.

2 thoughts on “Rolling on”