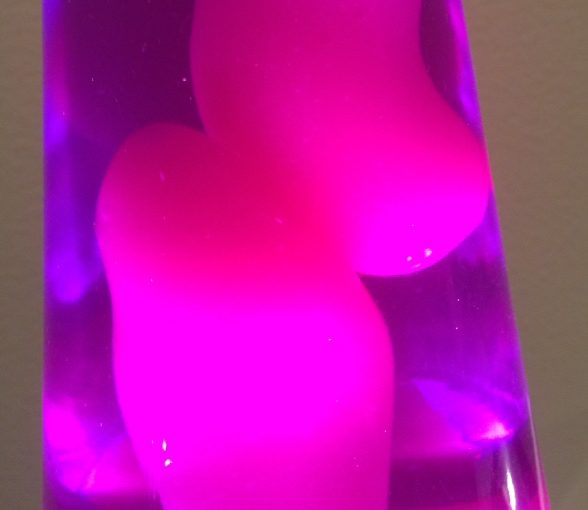 Luscious pink blobs float the length of the lamp. One elongates, turns into a skull, dies, rises, breaks off into a balloon, drips down, merges with a teardrop, becomes a head on a body, head slides down the body, merges, grows, distends into a tall fish, breaks into balls reaching for each other, thinning, two fingerlets touch and pull away, all disappear into a rolling planet, tumble then rise into a pillar, erupts at the cap, mushroom cap bubbles down, penguin slithers up, turns into a torso …

Life in the lava lamp is languid but never lazy.

It is slow, it luxuriates, but it never stops shifting shape as it rises, falls and twists. Loops and layers loll about in the lamp. Relax and let the flow fill the space with shapes. Let yourself go limp as your eyes linger longer.

Lick your lips and feel them thicken. Lift your eyes with one bulging blob and follow the fall to the lowest edge.

Grow heavy with the largest blob and release all you’re holding when it blisters and blows out. This liquidity is a lovely lesson.

Life is like lava. Its little lumps grow and meld, its large blobs melt and float, it continually lets itself go while we linger in the fluid moment.

Let go of your plans and your schedules and your boxes. Live in the lava.