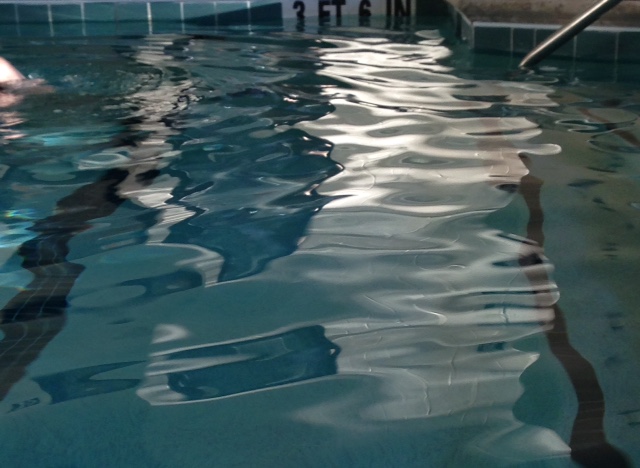 I treasure my pool time. I go during Adult Swim, and it’s quiet, tranquil, a pleasure to do laps.

During my first weeks after brain surgery, my pool sessions saved my sanity and sped up my recovery time.

Today when I arrived, the desk staff told me there are no longer any Adult Swim hours.

Attorneys for our community had informed the manager that Adult Swim times are illegal, because they discriminate against children.

I was outraged and went to talk to the fitness center manager. He said that it will now be called “Lap Swim” but that all ages must be welcomed.

In addition, the outdoor pool can no longer keep children out of the pool for 15 minutes every hour while the lifeguards take a break. They can call it “safety time” and point out that the lifeguards are not on duty, but if kids want to swim, they can. Apparently that liability is less a problem than being sued for discrimination.

I have loved swimming since I was a little kid. I don’t want to prevent any kid from swimming. But how can a few hours set aside for adults be age discrimination?

It isn’t, exactly. The principal is actually discrimination against family status, which was outlawed during the Reagan Administration by an amendment to the Fair Housing Act (originally passed as Title VIII of the Civil Rights Act in 1968).

As a reporter at my first job, in the early ’80s, I spotted classified ads for apartments that said “no kids.” There were so many listings with that prohibition, I did a story about it. Families found it pretty tough to find affordable housing.

That’s the kind of coverage that led to the FHA amendment in 1988.

At the time, I had no dog in the fight. I was in my early 20s, and the piercing voices and pattering feet of children had never been an issue in the three places I had lived.

I certainly understand the ban on discrimination against families trying to buy or rent a house. But swimming?

It’s not as though families are prohibited from ever using the pool. Adult Swim was a courtesy for those of us who want a quiet time to enjoy the pool without kids screaming and splashing and running around.

The lawyer’s answer is that the pool managers can prohibit those behaviors – but not based on age.

The staff shouldn’t need to be babysitters, but that’s what I fear will happen. Let’s face it: Parents will be at the pool to relax, and some of them won’t be disciplining their kids.

Who enforces “doing laps”? If I’m trying to do laps, and the kids are playing all around in my lane, I either have to confront the parents or ask the staff to do it.

Considering how huffy people get if you ask that they put their 100-pound Doberman on a leash at the playfield, you can just imagine how they would react to a request that they control their children.

I am trying hard to put myself in the place of a young parent who wants to take her kids swimming, but has to wait two hours so that the old fogies can swim. Does she feel injured, discriminated against? Seriously?

Nonetheless, Adult Swim is discrimination on the face of it. The U.S. District Court decision against a Florida condo association reads:

If this were a case of a homeowners association allowing everyone to use the main pool at all available hours in the summer, with the exception of women, or persons born in Iraq or China, or members of the Episcopal Church, such restrictions would be equally unlawful as the restrictions on access by children.

It’s hard to argue with that logic.

Today’s penny is a 2004, the year of the decision in the Landesman v. The Keys Condominium Owners Assn case.