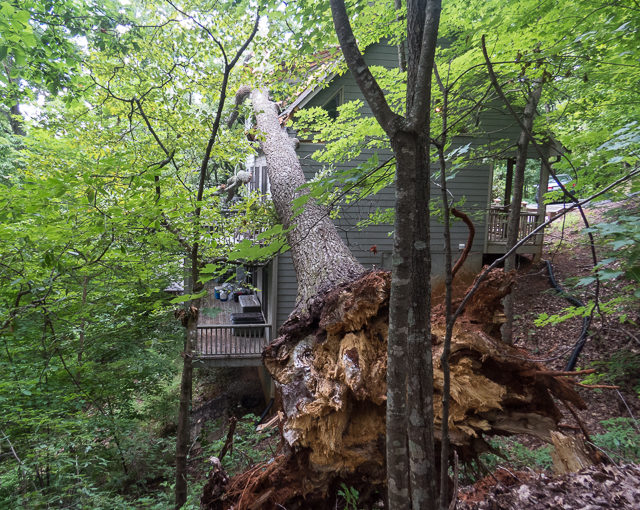 Angela hesitated before she told me why she was calling. “Ma’am… I’m sorry to tell you this… but….

“A huge tree fell on your house.”

Oh my GOD. I started to cry. I knew right away which tree it was, and I knew that the damage would be enormous.

“My husband had a stroke and he’s in the hospital,” I sobbed to Angela. “I can’t take it! I can’t take any more!”

The tree was a huge, venerable oak, about 75 or 80 feet tall. It stood on a steep slope just to the west end of the house. I had often looked at it and worried, “If that ever falls, it’s going to take out the house.”

So I monitored its health. Every spring, its leaves came out at the same time as the other oaks, and they were thick and full. Every fall, it bore tons of nuts. No large dead branches. No patches of fungus.

Yet it had fallen.

A neighbor had reported the tree falling on a house, and Public Safety went up to look and take photos while Angela called me. Rain was expected in a few hours, and the chief warned that I’d better get it boarded up or the house would be flooded.

I called the insurance company and filed a claim. The tree was still on the house, and it would have to come off before the holes could be boarded or tarped, so we tried to figure out the fastest way to get a tree service there.

I concentrated hard on my driving to stay safe during the hour and 10 minutes it took to get there.

From the front of the house, it didn’t look like a big deal. One branch had draped over the front roof, looking almost ornamental.

From the road, you could see that a tree had fallen onto the house, but all the damage was invisible from there. Broken limbs littered the front yard, while the drunken bees  still happily stumbled around in the passionflower.

I held my breath as I unlocked the front door.

Two holes were punched into the living room ceiling, with a crack that went all the way to the cathedral peak. The flood lights dangled by their wires. The huge beams that cross the room, which looked OK from the front, had deep cracks running down the back. Our new recliner was covered with debris. It was hard to open the sliding door to the deck. A huge limb, as big around as a normal yard tree, covered much of the deck and had knocked over the grill, wedging the door partly shut.

The railing is broken, but much of the deck still remains.

Astonishingly, the glass patio table was unscathed, and the herbs were all fine, albeit a bit lost amidst the massive greenery that now covered the deck. The next few hours I tried to just hold myself together while the tree service guys climbed around on the trunk and limbs.

They aren’t sure how to get the tree off the house.

They were impressed, actually, that the tree had not done more damage. “Your house was very well-built. I’ve seen smaller trees fall on bigger houses and do twice the damage,” one of them told me.

Glad to hear that the house was well-built.

Normally with a tree that size, they would use a crane to lift it off. But they couldn’t get a large enough crane up the mountain roads to our house. There isn’t a flat place for a crane or even a wrecker to sit. The tree is on a hellacious slope; you can’t get even to the base of the tree except on foot.

The obvious approach is to saw off the branches and the trunk in chunks. Eventually, the tree will lose its grip and roll off the house.

But it will roll straight onto the deck. The remaining piece of trunk is heavy enough to take out BOTH the upper deck and the deck below it.

The tree climber, Mark, walked straight up the trunk and onto the roof. He wrapped a tarp across the tree and the roof holes to keep out the rain.

The emergency service guys moved all the furniture and books away from the holes in the ceiling, and built a reservoir of tarp with small walls to cover the floor beneath the holes, in case the tarp didn’t hold up in a windy downpour.

They retrieved the herb plants from the deck – including the basil planter, which was hanging vertically by a single nail from the broken railing.

They are going to come back tomorrow to deal with the tree.

Just as they were about to leave, I thought I’d better go upstairs and check our loft bedroom and bathroom.

The loft closet was destroyed. A huge gash, and the wall was bowing outward. Clothes and rack in a heap under debris. At this point, I am just working like an automaton. Pick up the clothes, shake off the debris, lay them on the bed. Sort out the hangers, the purses, the scarves, and box them up. Make sure that they put tarp inside the closet, because the exterior tarp isn’t covering the hole well enough.

They tell me it will probably be six months before the house is repaired. I’m not optimistic. The water damage repairs, which should have taken three weeks, took three months.

Tom and I were really looking forward to sharing his recuperation time amid the green trees on the deck. I just recently got my studio space set up for my fused glass art.

Darling Sara and her husband Chris brought me dinner. She and other friends offered their guest bedrooms for the night.

Today’s penny is a 2000, the year that our house on Azalea was built.