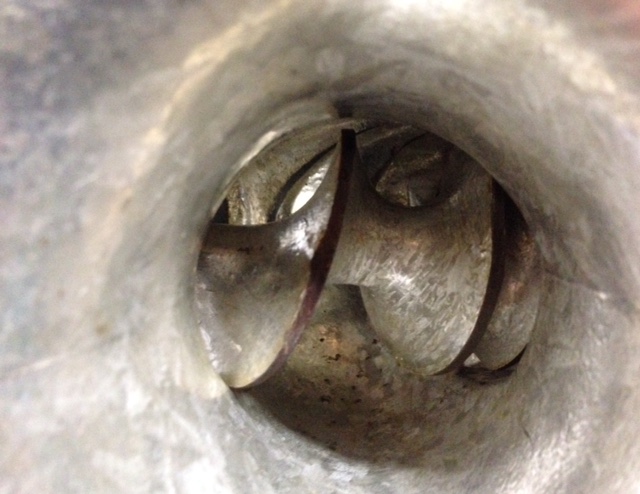 I own a very fine piece of German engineering that I really treasure.

It’s not Xena the BMW (which belongs to Tom). Although, this object has some of the same strength, grace and power in its design that Xena does.

It belonged to my mother, and I think she got it as a wedding present, so that would date it to the mid 1940s. The design, though, was mostly unchanged for many decades before that.

This meat grinder is made of galvanized cast iron, it appears. It weighs about five pounds.

Everything about it is aesthetically pleasing and functional. It is built to last pretty much forever. There’s a similar one on Ebay for $188, but I wouldn’t part with mine for $1,000.

It has a wooden handle attached to the drill center section – which looks like a tunnel borer (see featured image above) – and a toothed cap that is held onto the mouth of the grinder with a wing-nut. The whole contraption is firmly clamped with a vise that screws onto the edge of a countertop.

As you push the meat into the top of the grinder, the drill center pulls it in and down, and forces it out through the toothed cap. What comes out is the most uniform and beautifully blended ground meat that you could imagine. Ham salad made with this meat grinder is divine, as the fat and meat are rendered together into a delicious whole. It needs only a dab of mayo.

Then the meat grinder comes apart effortlessly and washes up in a minute.

This lovely machine has ground hundreds of pounds of meat, but still works with perfect smoothness. It makes a pleasant, low-pitched “HRMPH” with every turn.

So much nicer than the electronic whine of my food processor.

It’s embossed with the name of Alexanderwerk.

In 1885, the company’s website says, Alexander von der Nahmer started a foundry in Germany. But it wasn’t until he visited America that he discovered the product that made Alexanderwerk Inc. take off.

It was this meat grinder.

Now, I’m just guessing here, but being a German, he surely visited German communities in America, and so I feel confident that Germans designed the meat grinder.

Even if my ethno-centrist interpretation of history is wrong, von der Nahmer had to put the design into a form that could be mass-manufactured. And he continued to modify it over the decades.

The meat grinder was the beginning of a food-processing company that today has grown into a multinational manufacturer.

“Never stand still – this has always been the Slogan of Alexanderwerk,” the company site declares.

Note: Meat grinder action photos were shot by Tom, since my hands were covered with ham grease.

Today’s penny is a 1985, for the 100th anniversary of the founding of Alexanderwerk.