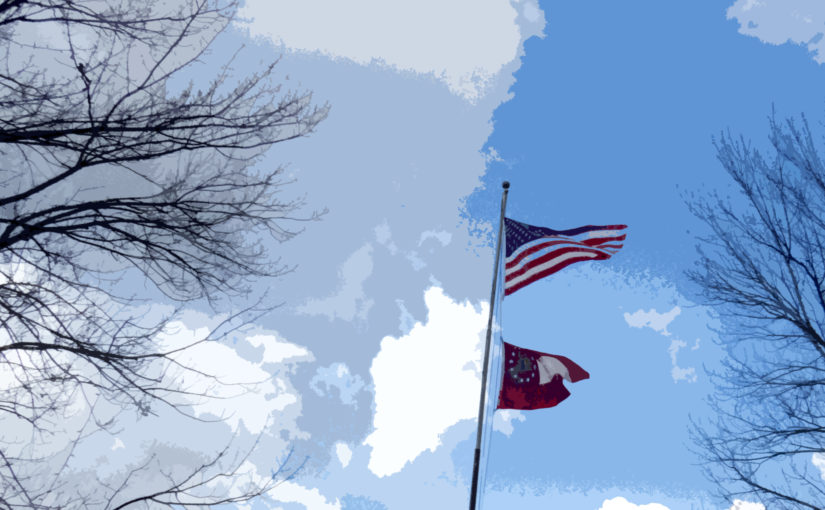 When the minute of silence came, I closed my eyes and bowed my head. My hands began to shake. And then I began to sob. I covered my face and held the noise inside so as not to disturb anyone around me.

A woman that I had met just a few minutes before put her arm around my shoulders. When the minute of silence was up, another woman came and gave me a long hug. It’ll be OK, she said. Stay strong. You are not alone.

I opened my eyes and summoned the strength to smile at her. I thanked her.

I know that some of you reading this post would like to mock me and call me a crybaby loser. Please respect me enough to read on.

I walked up the steps in Dahlonega Public Square to get a view of the whole crowd. Organizers sent around a sign-in sheet. There were 85 people. No one had expected more than a dozen or, at most, two dozen people for this vigil during the inauguration.

A man came up and stood next to me. He asked me why I had been crying. I hesitated. It was hard to find enough words for my feelings and my memories.

All those people. I was thinking about American citizens I’ve interviewed as a reporter, over the decades.

In 1981, in Warren, Ohio, I sat in crumbling houses with people who had been bankrupted by their medical bills. Working class folks who couldn’t get health insurance with a pre-existing condition, and became poor because of it.

I talked to steelworkers who had lost their jobs when the mills closed, who wanted to get an education or learn new skills, but didn’t know where to turn.

In Seattle, I witnessed public school teachers working late every day to make up for all that their students were missing at home. I flew to Alaska and sat in a bar with fishermen who lost their livelihood when the Valdez spilled 11 million gallons of oil. I got to know the homeless people near my downtown apartment.

The line of Americans I have known stretched before me like ghosts. They walked through the years, a gauntlet of one president and Congress after another. Some worked to help those Americans, and many did not.

In the past 20 years, I have worked in Afghanistan, Iraq, Egypt, the Republic of Georgia, 17 other countries. I have worked to support the spread of democracy, and until the Iraq war I still believed that America was the best example the world had of a democracy, despite our many failures and flaws.

Since I came back to the U.S. in 2007, I have had a decade to see the long-term effects of a government that has ignored its people – right here in my own country.

I learned to use census data to study the 1/5 of the U.S. population who live in poverty.

In the last 40 years the top 5% have become ever richer, while our infrastructure falls apart, while our public schools struggle to educate children who are born into disadvantage, while our ability to compete in the world economy falls further behind.

For 15 years I’ve watched fear-mongering and lies dominate our political life – too often unchallenged by mainstream media as it collapsed.

In this decade since I came to Georgia, a Northern progressive in a conservative Southern town, I listened to people explain their love of the Confederate flag, their ownership of guns, and their hatred of Muslims. I’ve learned a lot about the South and I no longer disparage Southerners.

At the same time, I have watched Americans turn more and more away from facts and put themselves into a bubble surrounded only by what they already believe.

In the past year, all of this came to a head. I saw utterly false information repeated and shared and passed off as fact, with no attempt to check the reliability of the source.

The anger, the blaming, the hostility, the lack of respect, the decline of civility, the close-mindedness, the people who simply stopped speaking or listening to each other … it has made me feel sick and exhausted.

We are all Americans. Every single one of us. Not just the ones that we agree with. All of us.

This doesn’t mean that anger is unjustified, that pain is unworthy, or that fear is unwarranted. These emotions are real for the people who have them, and none of us has the right to decide which emotions are acceptable.

It means that we have to respect other people enough to see and listen to their pain, anger and fear.

It means we all have to respect the rule of law.

The 304 members of the Electoral College who made Donald Trump president of the United States did as they were required to do by law. Hillary Clinton had 2.9 million more votes than Trump did, but the popular vote was overridden by this weighted system created by our founders, in part to prevent populous areas from dominating the executive office.

I am very concerned about the influence of Russia in this election. It is unprecedented and I believe it poses a genuine danger to our country.

I am frightened at the prospect of 20 million Americans losing health insurance.

I am appalled by Trump’s choice of cabinet members. I don’t see how anyone who lived through the Great Recession of 2008 can support a cabinet full of men from Goldman Sachs.

I don’t see how anyone can support a woman heading the Department of Education who has never had her children in public schools and who does not support equal public education for disabled students.

I wept at noon during the moment of silence as Donald Trump took the oath of office.

The results of a democratic, free and fair election must be accepted by its citizens. I don’t like it, but I accept it as reality.

I also accept that the price of liberty is eternal vigilance. That means we must all continually watch what our elected leaders do, and ensure that they fulfill their obligation to uphold the constitution of the United States.

I dressed all in black and I stood with the crowd on the square in Dahlonega to express my feelings. That’s my right as an American citizen.

I went to the square to be with other people who shared my sorrow. Who felt, as I do, that this was a day to mourn. Who believe that Donald Trump is massively unqualified – in experience, in temperament, in knowledge – to lead this complex and powerful country, and that by taking this office he poses a danger to our future.

I hoped to meet a few other progressives who live in North Georgia. I was surprised to see several people from my community who had never previously identified themselves politically.

We talked about how we’ve been shushed by social groups in our community, people who assume we share their pro-Trump politics, or who castigate us if we don’t.

The turnout at this vigil here in North Georgia was heartening to all of us. We were also happily surprised by the many thumbs-up, shouts of agreement, and honking from cars that circled the square. It reminded us that, as people who did not vote for Trump in the 2016 election, we are the majority of voters.

There were hecklers, too – people who gave us the middle finger or pointed an index finger at us like a gun. There were people who yelled “Get a job!” (huh??) or “Go Trump!” There was no violence.

I stood tall and silent as the people in cars – both supporters and hecklers – shot photos and video of us with their phone cameras.

I went to the square to be comforted by like-minded people. But as I stood there, it was those hecklers who gave me my sense of purpose.

I continued to stand because I stand for them, too.

I stand to show in public that I will not accept erosion of the values that this country was founded to represent: individual freedom, human rights, and opportunity for all citizens.

I stand for the Bill of Rights, all of those rights, yes even the Second Amendment. I own a shotgun and I have the right to own it and fire it.

I stand for the rights of all American citizens to be treated fairly under the law. Whether I agree with their opinions or not.

I stand tall for the First Amendment because it is the foundation of all other rights. I stand for the freedom of expression, freedom of the press, and the right to peaceably assemble, because I have lived and worked in countries where people do not have those rights and I have seen the cost.

I stand against corruption wherever it is revealed.

I stand against hatred and lies contaminating our public discourse.

Friends, readers, I know that not all of you agree with me on my social and religious beliefs. Our nation was created by immigrants from all lands. We are diverse, and we will disagree. To disagree is your right and mine.

I wrote this post with great care to state what I know and what I believe without denigrating your experience and beliefs. I hope you will extend the same courtesy to me.

I write because I strive for agreement on a single point: What has made America great arises when we listen to each other with respect and work together for solutions that serve the country as a whole – not only the wealthy and the powerful.

I strongly agree with Trump’s statement in his inauguration speech:

I will be watching to see who is protected by this administration and this Congress.

Today’s penny is a 1991, the 200th anniversary of the ratification of the Bill of Rights.