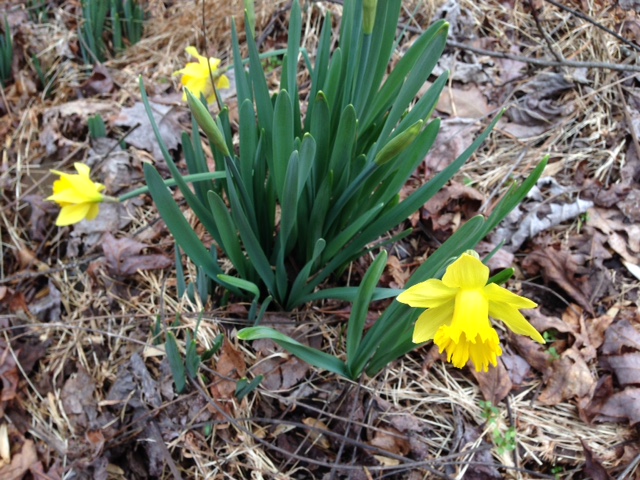 Daffodils are kind of … daffy. They come up too early every year, oblivious to the dangers that are looming just over the snow-laden cloud-filled horizon, sticking their cheerful faces to the sun at the first sign of warmth.

Yet there’s something about seeing the first one. It gives you a blindly loyal kind of hope, like a dog who waits expectantly at the door for two hours before the master of the house comes home.

I’ve kept a naturalist journal since 2008, and in about half of these eight springs I have been exclaiming over the fate of the daffodils, and how EARLY they are!

Gardening sites across the Internet are filled with breathless questions from people who are aghast that their daffodils are up ALREADY!

I think of them as a late-February flower, but my observations are inconsistent.

They grow from bulbs that don’t ever seem to die. This is why you can see big patches of them at the site of pioneer cabins that disintegrated decades ago.

Last year, I didn’t bother to note them until March 16. They may have been around earlier.

Not as early as in England and Northern Ireland, though. The daffodils there blossomed in mid-December.

Fear not, friends. The daffodils won’t die off if they blossom in the first week of February, the middle of January, or in time for Christmas.

They just like the warmth. That’s what prompts them to come up. Worst case, the leaves and flowers die. No worries.

If you’re really concerned, you can add some extra mulch and cover them with tarp or newspaper spread over some wooden spikes to keep them cozy at night.

Today’s penny is 2013, the previous year that the daffodils were up SO EARLY!