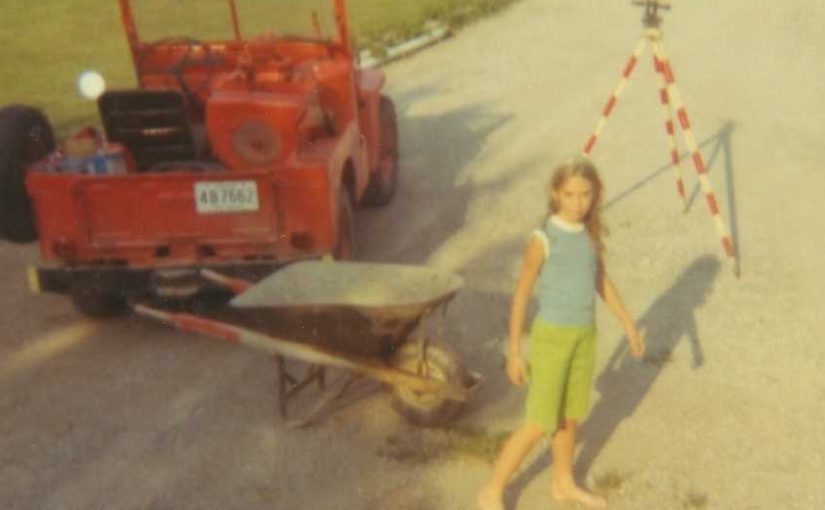 On our drive from the mountains to Atlanta, there’s a 10-mile road that has no opportunities for passing other cars. It’s too curvy, too many blind spots.

It never fails: In a hurry to get to Atlanta, appointment that we’re trying to make on time – on this road, we will get stuck behind a slow-poke driver.

Today, it was a cement truck.

At the end of the 10-mile road, we take an even smaller country road to cut down to the major route. Surely the cement truck would stay on the main road.

Nope, he turned down that little country road.

All these miles of staring at his back end brought to mind when I was a kid and I’d hear the roar of the cement truck coming to our house. Then, the cement truck was exciting. Like a visit from the circus.

The revolving drums were always very brightly painted with big shapes – circles, diamonds, curved lines. There was a big rocky noise of that gray avalanche of cement tumbling down from the drum into the chute, and to the ground.

I saw cement trucks quite a few times as a kid because Dad built our driveway. I remember him measuring the space, leveling the gravel, building the side frames, and ordering the cement. He tried to figure it right down to the smallest bit so that he didn’t waste any.

One time he figured it a little too close, or maybe the cement company wasn’t as precise as Dad was, but the truck was empty and Dad was literally scraping the chute to fill in that last corner. I think he used some dirt and gravel and mud, too.

The reason he built our driveway twice also had to do with measurement.

Our neighbor out back, Mr. Kugel, who was well known for his miserly ways, had sent out a surveyor to check the property lines, and discovered that our driveway was over the line. About three feet.

Mr. Kugel was not hurting for money. But when Dad asked for an easement for the driveway, Mr. Kugel demanded $3,000. Not a penny less.

So Dad told Kugel where he could stick that easement. And he built another driveway right next to the other one.

Dad was like cement. Slow and steady in the pouring, and, once set, immovable.

Today’s penny is a 1968, my best estimate of the year Dad built the second driveway.