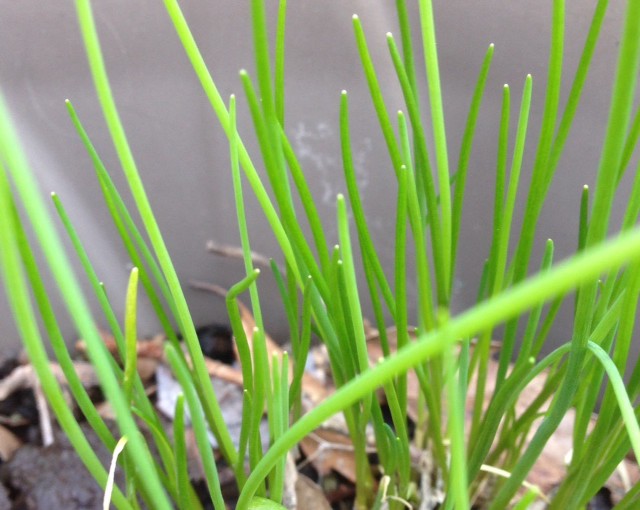 Last February, I ran away from home.

The winter was too much for me. I got into the car and drove to South Georgia and then Tampa and then Savannah.

When I finally came back on March 6, the cold was mostly gone. I bought my herb plants for the year, and that Sunday, I cradled them into their new nests of soil and set them out on the deck.

I thought then, and still do, that putting plants into pots is like putting animals in the zoo. It’s unnatural. It’s not an ecosystem. They might live but they won’t thrive.

I keep those herbs on the deck to eat, so I don’t let them flower; if they do, I nip the buds off. Though I talk to them every day, what kind of life do they have? Grow, snip, into the cooking pot.

I can’t help myself. It’s just so pleasurable to gather fresh herbs from the deck for dinner. Every morning I touch them and talk to them, and the smell on my fingers from their scented leaves is too intoxicating to miss out on.

This year was different from all the others. I dreaded winter, as I usually do, but the winter I got was something worse than I’d imagined. I spent hours on the couch, looking out at gray skies that were as cloudy as my brain, trying to understand the trauma that had stripped me like the bare trees.

In November I’d normally have taken all the herbs, dumped their rooted remains, and turned over the pots until next year.

I didn’t this year.  The herbs kept growing all through November.

They were still alive in December, when Tom was home on vacation, and we made a tomato sauce for eggplant parmigiana using our herbs from the deck.

In January and February I had to cover the thyme, oregano and chives a couple times when it was really cold, but they stayed alive.

The last snowstorm, on Thursday, I didn’t bother covering them. There were already big shoots of chives, and the first stirrings of green among the spindly thyme and oregano, but I figured since they’d made it this far through the winter they could stand a few inches of snow.

The spearmint, which I thought was dead, has put up a bunch of new small leaves. The peppermint still had a single stalk of leaves that lasted through everything, uncovered the whole winter, and now it’s got newbies pushing up for the sun: Today I celebrated their “birthday.”  Their stems are spindly, and they’re hungry for fertilizer. They need trimming and love, caged as they are here on the deck.

I’ll bring in fresh basil plants, and see if the bee balm resurrects itself. Another year, another zoo of herbs.

I’ll apologize to them for keeping them captive.

Already I can smell their minty oils when I run my fingers over their leaves.

They lived through winter, and so did I.

Today’s penny is a 2015, the year that these herbs arrived on the deck. There it is, nestled next to that sprig of peppermint.