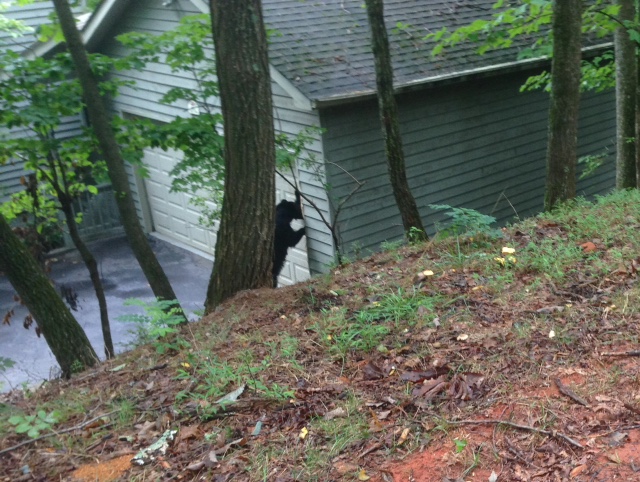 Yesterday was busy enough as it was, but I also had to stop to intervene in a neighborhood break-in.

I was driving to go and fix lunch for Tom. A fat black bear cub was wandering along the road. I slowed to a crawl, looking for his mother.

She was easy to spot. Standing on her hind legs, she was ripping into someone’s garage door.

I called Public Safety while keeping an eye on her and her three cubs.

We have lots of bear break-ins this year. I think there were more births because of an abundant nut crop last fall. New people have moved into the community and don’t realize that they cannot leave garbage and pet food in accessible spots like an unlocked garage.

So we have at least one bear family that’s turned to burglary. A mama with three growing cubs will feed them in any way that’s expedient. Once they get accustomed to easy meals in garages, they just make the rounds.

I figured that’s what this bear was doing. I didn’t want to mess with her, naturally, but I laid on the car horn and yelled at her out the window.

She turned and looked at me with what could only be described as boredom. Oh, a human again? Whatever.

Not good. I kept honking and yelling. She gnawed at the door frame, but then after a few more looks in my direction, she ambled over toward the house.

Since the residents obviously weren’t home, I laid full-body on the horn and screamed until she steered away from the house and led the cubs over the hill into the woods.

I got out and yelled some more and watched her to make sure she wasn’t just going to the next house, but they went toward the woods.

I went down and grabbed a few photos of the damage she had done: A friend who’s also a keen observer of nature said that it looks like she was after bugs, not anything in the garage. Grubs are one of the regular sources of food for black bears.

“I wonder if there are termites in the wood. They can hear and smell them,” she wrote. “The cabin near us had bear damage like this and there were termites.”

How about that? Hadn’t occurred to me. So maybe she wasn’t a burglar after all.

When it comes to nature, you can always learn something new.

Today’s penny is a 2012, the year that bears broke into our house. That bear family was already ruined by people food, and had to be euthanized.