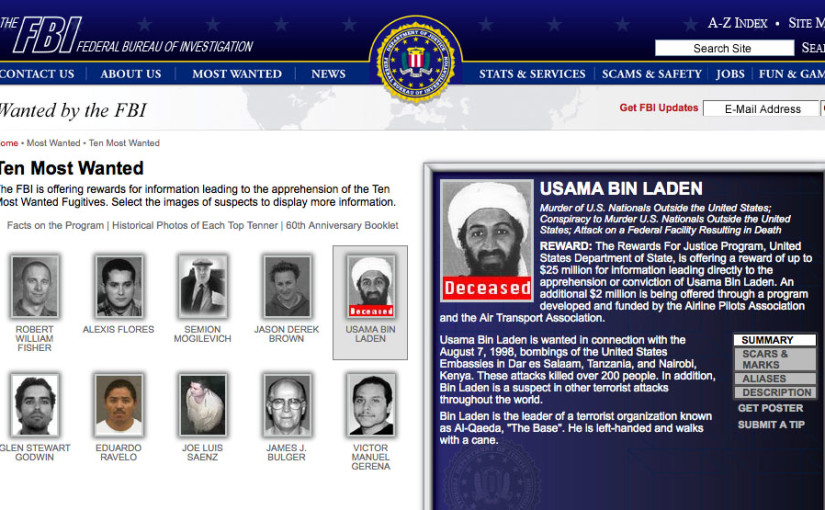 Last night, on a re-run of The Newsroom, the killing of Osama bin Laden was the major news event of the day. May 1, 2011.

I watched the reporters and other Americans cheering and high-fiving, and it brought back the feelings I had that day.

I wasn’t jubilant. I was sad.

My sorrow was not, of course, for bin Laden, under whose command al Qaeda killed thousands of innocent people.

I was sad that so many people saw this as a victory for the United States, and a revenge for September 11. It’s natural that people were glad to see this enemy gone, but from many it was a bloodthirsty celebration.

It was not a war-ending triumph. Too much had happened in the 10 years of the War on Terror, during which bin Laden had been a top target. In that time, al Qaeda had far outgrown its founders.

Al Qaeda is a network of affiliates in a number of countries, a network of terrorists that did not need bin Laden to grow. You don’t shut down a network by cutting out one member.

Tom and I had lived and worked in Afghanistan and the United Arab Emirates. I’d had assignments in Iraq, Egypt, and elsewhere in the region. I saw how the U.S. actions look from that side of the globe.

We often look like a bully – telling other countries what to do and enforcing it with our military muscle. And we look hypocritical – criticizing others for human rights violations while ignoring our own.

Through our own actions we made enemies who turned to terrorism.