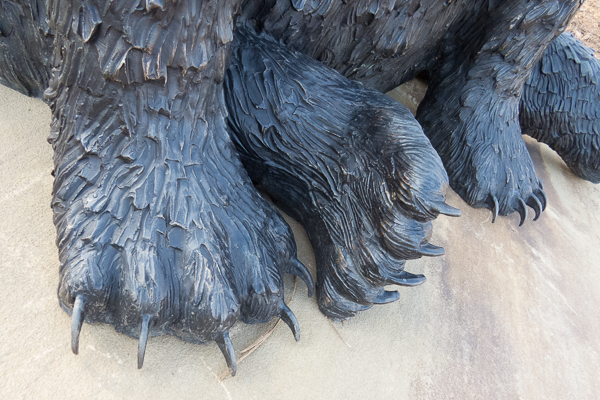 The kids really enjoyed themselves playing with the black bears.

They climbed on top of Mama bear’s head, tried to stick their fingers in the bear cub’s mouth, petted all four bears with vigor. Would you let your kids do that?

Three times this week, I watched parents encourage their kids to play with bears. These particular bears are permanently stuck at the community playfield as statues. If we lived in the city with no bears, I wouldn’t be as irritated by these statues. But in my forested community in the North Georgia mountains, black bears were here before us and don’t intend to leave. They wander down streets and through yards regularly from March to November.

My house has been broken into three times by bears. We finally had to put electric fencing over the windows to stop the bears. (Homeowner tip: Did you know that double-hung windows are extremely easy to push in?)

Black bears do not normally prefer to forage in human houses. But this particular bear family had been ruined by humans who fed them.

Feeding a bear or any wild animal (other than winter feeders for birds) is the worst thing you can do for it. It accustoms them to human food and human presence, and destroys their willingness to forage for natural sources.

And then there’s just ignorance. Lots of people inadvertently feed bears by leaving garbage cans on the deck. Even recycling bins will attract a bear.

We did that in our first two years here, not realizing until it happened that a bear can easily climb 30 feet on even a small-diameter deck post. But we learned, and we hadn’t had any bear temptations outside for three years when the bear broke in.

The burglar bear family broke into other houses too. Eventually they were captured and transferred to the forest. Unfortunately, they were ruined by then and wandered into the nearest town, where they resumed their break-ins.

They had to be euthanized.

My community was in an uproar over this. An effort began to educate people about black bears.

One of the results of this effort was the bear statues, deliberately placed in the central playfield where families congregate. Beside the statues is a large kiosk which boasts that we are “doing our part” to keep bears wild. It describes in detail the life of a bear throughout the year.

There is nothing in this description that tells people not to feed the bears – despite the fact that people in the community have been known to feed them hamburgers and cookies.

There’s a brochure at the kiosk, labeled a “Bear Smart Resident’s Guide” ( I guess visitors don’t need to be informed?).

The brochure does not directly tell people “Don’t feed bears.” It warns against inadvertent feeding, such as leaving your bird feeder accessible, not cleaning your outdoor grill, or storing dog food in your garage. It emphasizes respect for bears, keeping your distance and not letting them feel comfortable around your home.

I’ve watched how families interact with this playfield display. They do not read the kiosk and they do not take the brochure. They let their kids play with the bears, and take photos of them doing so.

I don’t blame these people for doing that. The statues look like an amusement park display. The problem was in the original decision to place statues of bears in an area where children would surely play with them.

No doubt some parents do the right thing and use the statues as a way to educate their children about these wild animals. But clearly not all parents do this. The very placement of the statues indicates that bears are to play with. Like big cuddly toys.

If you teach your children that bears are cute and that it’s fine to play with the bears, the natural barrier between humans and dangerous wild animals is broken.

People who start to think of bears as toys will feed them. And feeding them leads to their death.