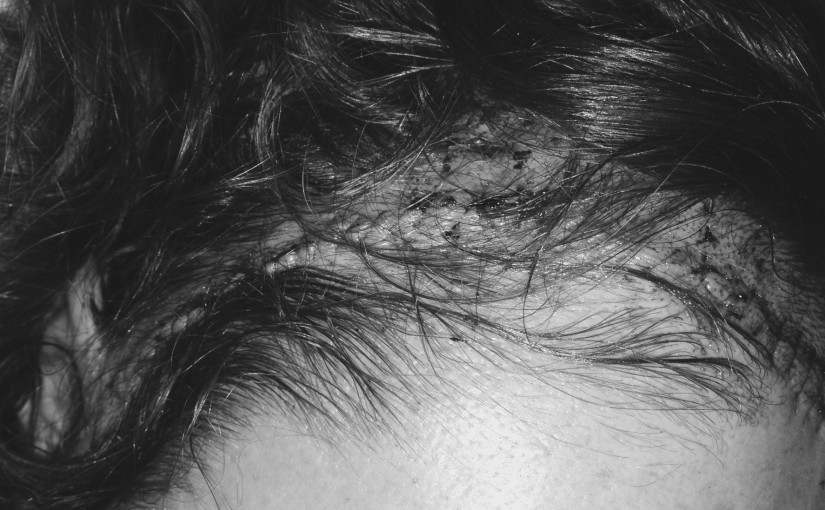 The neurosurgeons had big grins on their faces when they came to see me today.

Because of the aneurysm location, they didn’t know, going in, exactly how it would work – closing the hole in that major artery on the right side of my brain. But they anchored it back together with a metal clip, and all is well.

Yesterday, I didn’t realize that the surgery was so risky. I just knew it was the only option, after the angiogram showed that this hole was in the wrong place to be corrected by the less-invasive angioplasty.

I also had no idea it would take so long – nearly five hours. I went into surgery in early afternoon, and woke up at 9 p.m.

I’d already had one incision in my head. The night I arrived they shaved a spot just above my left forehead and cut it open to insert a drain. This relieved the pressure and contamination of the hemorrhage.

For the surgery, they sliced a six-inch incision along the right side of my face, and peeled the skin back from my scalp. Then they used the surgical equivalent of a bandsaw to cut an apple-sized hole in my skull.

This gave them access to the artery, and they repaired the hole. No sutures involved there – it would be like trying to sew up a piece of wet parchment paper.

They ran tests to be certain that the hole was completely sealed and that there were no others. All clear.

They put back into the hole the sawn piece of my skull, and they used four titanium plates and screws to hold it in place. Eventually, like any broken bone, the skull will mend.

The titanium will stay forever – not enough metal to set off airport detectors, the doctors assured me.

They neatly sewed the long incision with a kind of suture that dissolves after some weeks.

This is not a surgery that you want to have done at your neighborhood clinic. (For a longer description, see this article.)

I thought I was lucky that the ER doctor in Jasper had known to send me to Emory, but it turns out that the luck was in having a bed available. Any ER doctor on the East Coast would have known about Emory’s neuroscience unit, one of the residents assured me.

My neurosurgeon, Dr. Daniel Barrow, is a specialist in brain aneurysms and was a leader in the development of what are now standard procedures for dealing with ruptures.

I am in good hands.

But man, does my head hurt.

Today’s penny is a 1995, the year that Dr. Barrow became head of Emory’s neurosurgery department.

[This post recreates the day of Nov. 17 after the fact, but was published under the date it happened to maintain continuity.]

One thought on “The gorey details”