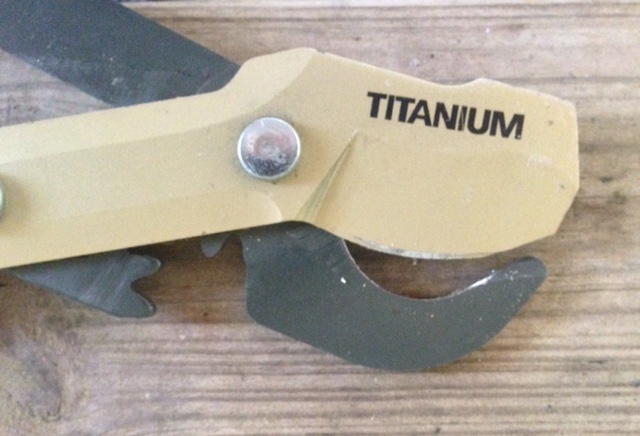 On the drive in Friday, Tom flinched every time a branch scraped against Xena on Booger Hollow’s narrow and rhododendron-infested roads. So today, I got out the loppers to trim them back.

It was a three-hour chore. But the destructive beast inside me was growling with delight to be off the leash.

Loppers were unfamiliar to me until about five years ago. I learned that if you need to clear trails and roads in forest on a regular basis, loppers are your best friend.

You use them to lop off those pesky branches that get in your way. You can even cut down small trees with a decent pair of loppers. They are like pruning shears on steroids that have mated with handgun.

Because of the way loppers are designed and constructed, you don’t need a lot of strength to operate them. The cutting edge is powered by a kind of gear, which operates on the strength of the levered handles. (Don’t remember geometry? Here’s a refresher on how a lever works.)

I love my loppers. Those things are amazing. And addicting.

When you can just snap off a healthy branch as thick as your finger in a half-second, you get a little power rush. And you do it again and again. Last year we bought a bigger pair of loppers but I didn’t have the chance to put them to work. Today was the test.

Quickly learned that I could cut down a tree with a trunk as big around as my wrist. Somehow this is even more satisfying than a chainsaw, because you have the illusion that you are winning by your own power alone, not because you belong to a species that invented a gasoline-powered engine and a blade that runs a chain full of sharp little axes at high speed.

This is way better than breaking glass, because the branches can just decompose where they fall.

Wanton destruction. I snipped off and tossed branches aside without speaking to the plants. I muttered like some grizzled old-timer about Laurel Hell and nasty rhodies.

If a branch got too close to my head, I reached up with those loppers and just snapped it off. Raw power.

Makes you understand why barbers like to cut your hair too short.

Today’s penny is a 2015, the year I bought the new and bigger loppers.