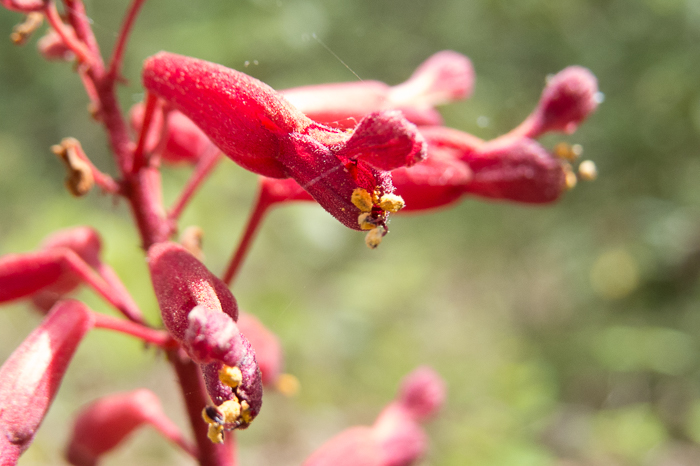 I had finally figured out that the red buckeyes would never flourish in our dry, clay patch yard at home. So I carefully dug up the first one and put it into a pot to take to Booger Hollow.

Its root had a funny kink, presumably from where I’d broken it as a seedling.

I look around for a cool spot with good soil that was likely to get decent water retention. We had some mushroom compost, which was my latest cure-all idea for amending the soil, so I worked that into the soil before creating holes for the red buckeye and a bottle-brush buckeye that I’d raised from seedling on the deck.

I carefully placed each tree, telling them, “I promise you’ll like it here! No deer eating your leaves, no car fumes, living in a real forest!” I put a plastic tag near each so that we wouldn’t accidentally trample them.

We went back to the cabin, and I carried with me the second red buckeye, the one Katie had given me. I was sad to see the root when I dug it up: The soil at the house was so poor and rocky that the tap root had become a big corkscrew – convoluted itself around rocks, looking for nutrients.

“Don’t worry,” I told it. “You’re going to a place where life will be much easier.”

As soon as we got to the cabin, I went to check on the other two buckeyes and got a huge shock.

There was a big empty pit where the young red buckeye had been, and its tag was tossed a good 10 feet away.

The bottlebrush buckeye was clinging to the side of a half-dug pit.

Animals generally don’t like buckeyes (other than the fresh leaves), because they are mildly toxic. These holes were so tidily and precisely dug that we couldn’t imagine an animal doing it.

I started to cry, wounded by the malice of it. Who would come out here and steal a buckeye? And it was so special to me. It had survived more than four years despite my ineptitude and the deer.

Now it was gone – uprooted from its new forest home. I just couldn’t believe it.

While Tom scouted for other clues of the intruders, I searched to see if the tree had been tossed aside. I knelt sobbing next to the pit where it had been, and clawed blindly in the brush next to the hole. Then suddenly I noticed a branch with a funny thick curl – the root.

Though a bit dried out, it seemed OK. I quickly replanted it.

As I did so, I remembered that I had put mushroom compost on it – and that in Europe they use pigs to hunt truffles in the forest.

This has been a big year for wild hogs in North Georgia. We’d seen their tracks in our Booger Hollow yard and along trails, and they had been trapped in our community too.  Hogs are very destructive – especially to trees.

I recovered the bottle brush buckeye and put extra bark and leaves around the base of both trees to protect against the frost. I did Reiki on them as they snuggled in.

I wanted to plant the second buckeye at the north end of the yard, where we’d more easily be able to keep an eye on it. But when I started to dig, there was only poor soil and rocks.

The buckeye whimpered, “I thought you said it would be nicer here….”

I tried digging several places on our property. Every place had clay soil, rocks, no better than where the poor thing was before.

I finally chose the best spot I could, just a bit downhill from the other red buckeye. There was lots of humus from dead leaves, and I chopped up a chestnut oak sapling nearby to reduce competition.

I cried again as I planted the poor buckeye with its twisted roots, because there was not a lot of room to stretch out, and the soil was not rich and not all that moist once you got past the dead-leaf humus.

As I spoke to the plant, I had a flashback to another life: being a tired mother trying to raise a daughter on this poor soil here in the mountains, wanting to give her so much more, but only being able to give her a rocky clay living scratched out like chickens feeding in the dirt. It hurt so much.

I mixed some lime in potting soil, and put that around the edges of the buckeyes, hoping that the lime would counter any remaining mushroom smell.

When we returned to the cabin, I checked anxiously to see if the buckeyes had survived. They had new leaf buds, and I rejoiced.

They are different trees – lush, big leaves, bursting with health.

They smiled at me and promised they’d grow up to be adults now.

“Your red blossoms will feed generations of hummingbirds.

“And when you have lived your whole life, and you’re ready to transform back into the soil, you’ll get your revenge.

“You’ll see a wild hog nosing around. And you will catch the strong wind and crash down right onto that hog and kill it.”

The buckeyes have grown taller this year. The seedling that I thought I’d killed is a good 18″ tall. Katie’s gift is more than two feet tall now.

Again I told the buckeye trees the story of their lives. How they would feed hummingbirds and kill wild hogs. They nodded in the dappled sunlight and promised to fulfill their destiny.

I went to the cabin, after six months away. After a long, hard winter, when I had lost faith so many times.

I ran to the buckeyes. Their leaves were glowing in the sun.

A gorgeous red stalk of flowers rose straight up from the middle of Katie’s buckeye. Just waiting for the hummingbirds.

“You kept your promise. We’ll keep ours.” Today’s penny is a 2013, for the year that I brought the buckeyes to the forest.

3 thoughts on “The red buckeyes: In the forest”