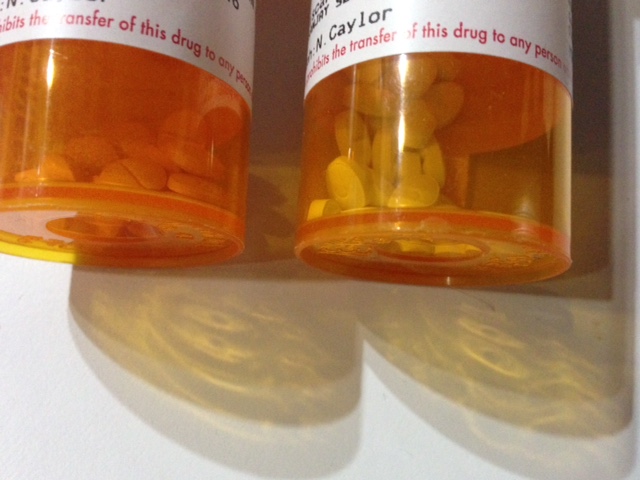 The surgeons are done with me. Today I turned myself in at the office of the primary care doctor.

My usual doc was out of the country, so I went to his partner. I wasn’t too sure about going to a stranger. But I’m anxious to get some closer-to-home follow-up on the daily trials I’ve been dealing with:

He reassured me that the stitches look fine, and said I could put anti-itch salve on them. “The incision killed off those nerve endings, so you will always be numb there. But the feeling will come back all around it.”

He was not willing to give me any more Percocet or Valium for the pain and anxiety, because they are so highly addictive. The Valium, he said, “should only be given to you in the hospital when someone is right there to monitor your response and control how often it’s taken.” I didn’t tell him that at discharge they’d given me a bottle of both drugs to take home – and that I still had some.

For the anxiety and crying, he said, “Do you know what will cure that?”

“That’s right,” he said. “Your brain’s just been through a trauma and it takes some time to settle down again.”

I told him that I’d been briefed on this by a friend who was a psychiatrist.

I’d need to be on the anti-depressants for three months at the very least, but probably six to nine months – “That’s what the research shows is most effective in these cases.”

Since this is just what my psychiatrist friend had told me, I was prepared for it.

But I still felt disappointed in the idea of taking anti-depressants. It seemed like a defeat, after all these years of managing depression on my own, without drugs.

“Can I wait awhile before I start this?” I said. “If the anxiety is better, maybe I can just wait this out?”

He looked at me, then said, “I think you’re delaying the inevitable – but, sure. You can wait a week and see.”

We scheduled an appointment for a month from today. I went and got the prescription filled.

I brought them home and looked at them.

My will climbed out of its hole and sat upright. A little wobbly. But there. Saying, “No.”

I talked to Tom, and he agreed that I was right to give myself a week.

I made it all these years without anti-depressants. I can do it.

The cure is time.

Today’s penny is a 1993, the year that I mark as having mastered depression.