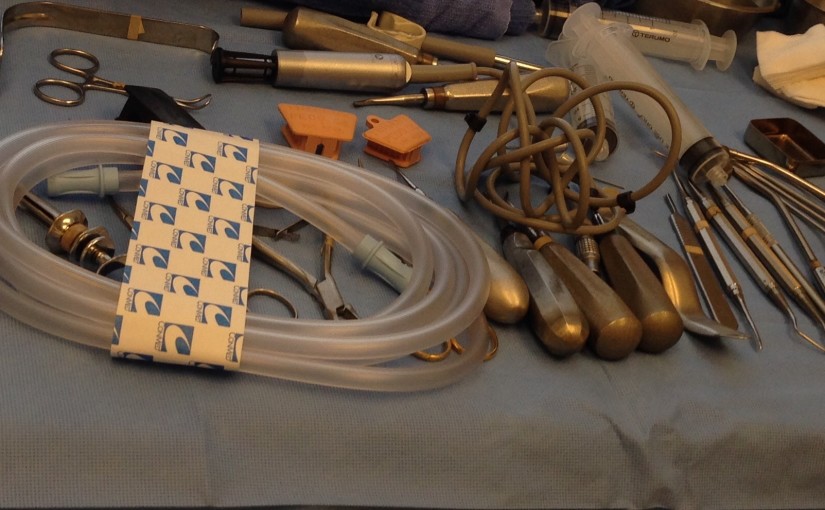 My number 13 tooth has been a problem for a long time.

It was probably one of the first cavities I had filled, as a kid. It was my only root canal, done sometime in the mid ’90s, and at the time there were a couple of tiny forks off the root that the dentist couldn’t get at. So my dentists have always had to keep an eye on it.

My unlucky tooth was also kind of an “indicator species” for stress: When that tooth hurt, I knew I had been grinding my teeth.

Out of the blue a couple weeks ago it became excruciatingly sensitive to pressure. After a visit to my dentist and two specialists, a round of antibiotics and lots of pain medicine, I opted to have it pulled and have an implant put in.

The oral surgeon explained that if I was lucky, I’d be able to do both the extraction and implant all at once. That’s what I had done today.

There was some difficulty getting the implants to grip properly, and so a procedure that is normally an hour and a half was two hours. I did this with just local anesthetic, did not even use laughing gas – but two hours is a long time to spend in that chair with towels draped over your face and a lot of equipment in your mouth.

Afterwards though, it hurt like a son of a bitch. I couldn’t get to that Percocet fast enough.

The pain in my checkbook was pretty major too: It cost $3,000, not counting the specialists’ consultations and the $1,000 crown that I’ll have to have put on after five months. That pretty much wipes out my entire health savings account.

It’s also a pain because I can’t drink for two weeks. This normally wouldn’t be a big deal, but I leave Saturday for vacation, and martinis with my sister in Ohio is something of a tradition for these annual treks. Lucky because, despite living in a rural area, I have a good dentist who referred me to a good oral surgeon.

Lucky because I own a dependable car that got me there and back.

Lucky because my general health is good, and I heal quickly.

Lucky because I have a spouse and friends and family who love me and are cheering me on from the sidelines.

Lucky because I live in an era of modern dentistry, and a country where it is widely available.  A time and place where you can have things like this done with relatively little pain and very high odds of success.

Lucky because the extraction went smoothly; the tooth had a fracture which could’ve broken when it was pulled.

Lucky because advances in technology allowed me to get an implant instead of bridgework. The science of this is pretty amazing: the implant works something like the anchor that you put in drywall when you want to hang something heavy. It’s a solid piece of titanium, a permanent solution that will look and act like a real tooth.

Lucky because I have healthy blood that the oral surgeon used to make a natural product for this implant. This is also miraculous: They draw a tube of blood and put it in a centrifuge while you’re in the chair. They use the white blood cells to mix with bone material to make the graft, and another part of the blood to form a membrane which goes over the whole thing.  This process helps it heal naturally. (It was only $150; the bone graft was $550.)

Lucky because I was never an alcoholic or drug addict, so it’s not a problem for me to take Percocet when I need it.

Lucky because I had a clean, safe, and lovely home to recuperate in.

Yep. Today was my lucky day.