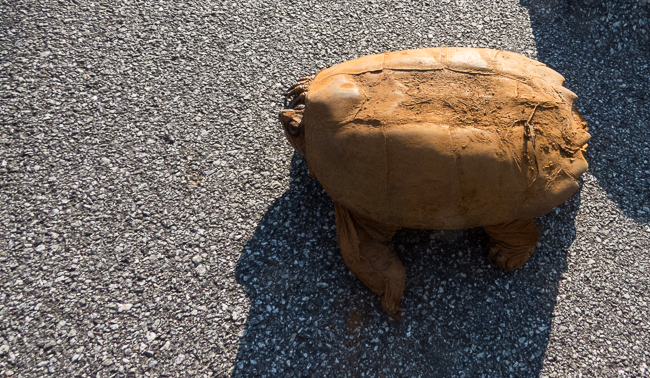 Why were all the cars stopping?

I was on my third lap of 12 at the playfield, just hitting my stride. I’d been half an hour late for most of the day, kept trying to make up for it, kept failing.

On the road next to the playfield, cars were slowing down and stopping at a certain spot. At first I thought there must be a bear around that they were looking at.

As I got closer, I saw a tan-colored lump in the road. It looked like a dead dog. I was surprised that no one stopped to move it off the road, or check to see if it might still be alive.

I went up to the road, thinking I could at least move it off to one side to prevent the traffic congestion.

It was a turtle. A big, old, very dehydrated turtle. The mud had dried all over him, so he was all one color on his shell and skin. He seemed disoriented, waving his head around as though trying to smell which way to go. He couldn’t seem to coordinate his legs.

I tried to give him a nudge with my foot, and he snapped at me.  He kept turning his body but not moving ahead. Every time I tried to move him, he snapped and kicked and gave me dirty looks.

He was not easy to move. His head and neck were about the size of my fist; his shell was more than a foot long, and his tail was more than 6 inches long. A woman pulled over and offered to help. She had a box and we tried to encourage him into it, but he was only interested in the shade it created. She had a towel and I tried to put that over him and pick him up, but he snapped and kicked fiercely. I put him down. I kept directing traffic while she called for help from Public Safety. I held the towel up to make shade. The turtle was not moving. People stopped and stared. A few more people pulled over to help, but there wasn’t much to be done.

The Public Safety guys showed up, and one of them picked up the turtle carefully.

Snapping and kicking, the turtle tried to get away, and when that didn’t work, he let loose a stream of urine and kept his mouth open in a silent scream. The guy laughed, carried the turtle over to a small stream next to the road, and tossed him in.

I fretted. There wasn’t much water in the stream, hardly enough to get the turtle’s tail wet, definitely not enough to cover him. He was barely moving.

He turned toward me. You know how animals sometimes get a look like they’re talking to you with telepathy? He looked right at me, unblinking with big eyes, and I heard him say Thank you.

Now I was a whole hour behind schedule. I did my three miles anyhow. Did it faster than last time. Thought about things.

Thought about today, all my days that are always running late, because I’m busy, so busy. All of us with our busy days, so busy, too busy.

Thought about the turtle. I reckon he started crossing the road and got stuck waiting for all the cars, and then dried up from the hot pavement in the hot sun. Got confused. So many cars. So many more than there used to be.

On my last lap, I went up to check on him. He was moving good now. He had his head under the water, eating, drinking, kicking his wet legs and flicking his wet tail.

I went home. I drove slowly and looked at the trees. I had plenty of time.

Today’s penny is a 2015, the year when time started to slow down for me.

4 thoughts on “To get to the other side”