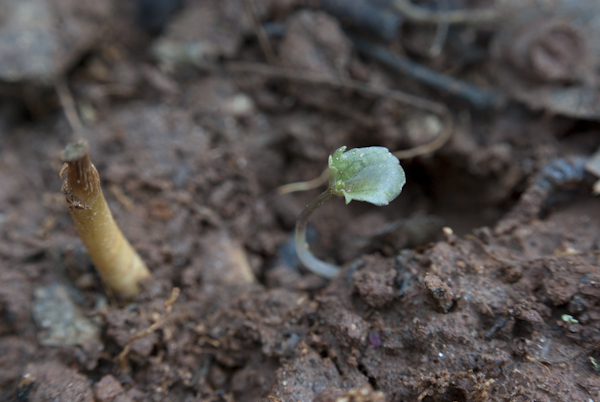 I’ve been reading a book called “Growing Trees from Seed,” by Henry Kock, which is filled with practical advice for growing native species of trees in North America.

It’s a bit scary, too, because the author makes you aware of the various hazards to the health of a seed: chipmunks, slugs, soil that isn’t properly prepared, overwatering, too much sun, alkalinity….

So I went back to the red buckeye seed again to see if I could tell more about those bits coming up from the ground. I could see that the tiny leaf was just one of many in the area, so I cleared it away.

I was concerned about the bare rootlike protrusion – had the seed somehow turned around and stuck its radicle into the sun, instead of putting out a nice green shoot?

I dug around in the soil, and saw a thicker root – that was the original radicle, and the protrusion from the soil was a fork off of it.

And then, as I tried to feel where the rest of the seed was – I broke it.

The radicle came clean off the seed, leaving a naked unfed root to fend for itself, and a seed with probably not enough juice left to regenerate the radicle.

I could not believe it.

The shock was something akin to being in a car accident. It happens so fast, and you’re left in a daze, reeling with anger at yourself for being so careless.

Of all the dangers that the book warned about, the stupidity of trying to examine a growing seed was not one of them.

My cruel hands had destroyed it.

I put it back under the ground. Didn’t know what else to do. Except cry.

Katie, a friend who is a gardner, felt sorry for me after she learned the fate of my red buckeye seed. She bought me a red buckeye from a nursery. I made Tom dig a hole for it, and planted it near the seed corpse.

I see a tiny sprout… is it the buckeye seedling? Maybe?

Wow! The buckeyes have leaves!!

I can’t believe it – the deer ate the buckeye leaves. I thought the leaves were toxic to them. But we have so many deer that they are constantly scrounging everywhere for food. They’ll eat anything. Cruel mouths.

I’ve put chicken wire around the buckeyes to protect them this year, before the leaves even come out.

Those damn deer! They got the leaves AGAIN.

I made the cage tighter around the buckeyes this year.

They’re safe! They have leaves!

But … they’re not doing so great. I don’t think they’re even an inch taller this year than two years ago.

Poor buckeyes. They’re just not growing much. And how could they? Hardly any nutrients in this cruel soil. How do those oaks do it??

I love them so. I want to see hummingbirds feeding in their red flowers.

Maybe it’s just not to be.

Today’s penny is a 2012, the year that the cage protected the buckeyes.