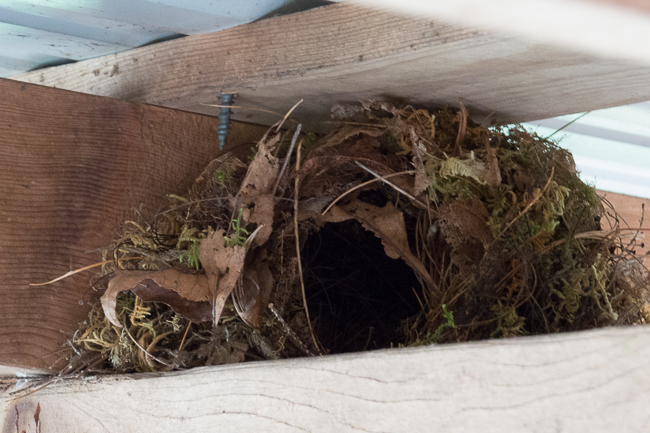 The Carolina wren is a cheeky little bird. It produces song at an earsplitting volume, and will build a nest right on your front porch.

At the cabin in Booger Hollow, we have a spot that’s been used by wrens for several years. The first year that we spent a week at the cabin, we watched two wren parents feed their peeping babies from sunup to sundown. I will never forget how hard those parents worked. Made me tired just to watch them.

We always have hopes for more baby wrens.

So this year, a male wren came and checked out the old nest, seemed to spruce it up a  bit. You know, a few leaves here, a twig there, new cathedral ceiling, some spray paint on the cupboards.

Then mid-afternoon, a female came. She seemed to be inspecting the nest – but more importantly, the neighborhood.

She kept looking around with a jerky motion of her head and glaring eyes, checking out all 360 degrees surrounding the nest, and I could imagine her evaluating each risk factor on her checklist.

She looked around on the interior side, jumped into the nest area, jumped out and looked to the exterior side, back to the nest, and so it went for at least 10 minutes.

Then she left and we didn’t see any more activity at the nest. Maybe it’s the schools in Booger Hollow; they’re not the best.

Or maybe it was the way we dress when we’re at the cabin. “There’s some scroungy-looking people hanging around,” I can hear that wren telling her would-be mate.

My IBird app informed me, “They are known to build multiple nests to confuse predators.”

Perhaps this is a fake nest. But it’s bigger than previous years and with my telephoto lens I could see details of the remodel. Why go to all that trouble for a fake?

Maybe I should follow this strategy. We could build an entire fake life in the city, and when ISIS takes over America we’ll be living in Booger Hollow where they’ll never find us.

Today’s penny is a 2012, the year that we had baby wrens in that nest.