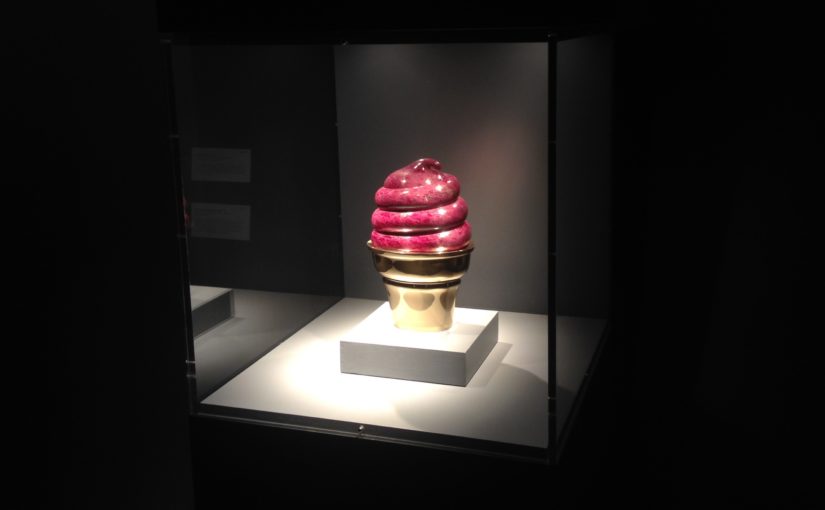 Ruby Kusturd is made of the world’s largest crystal ruby, 30,090 karats.

Shaping a gem of that size into a swirl of soft ice cream was Mark Mothersbaugh’s way of mocking both fine jewelry and fine art. The swirl is a bit reminiscent of the conical hats worn by the band Devo, for which Mothersbaugh was the lead singer.

Yesterday I was able to slip away from the hospital for a couple of hours for a much-needed reprieve. I walked up Euclid to the Cleveland Museum of Contemporary Art, where they had an exhibit of Mothersbaugh’s art, Myopia.

It seemed a perfect commentary on the Republican National Convention that is about to descend on the city.

Three of the guys who formed Devo were students at Kent State when National Guardsmen shot down unarmed students. This event was the impetus for the band’s central message – that instead of making progress and evolving, mankind was devolving and becoming more primitive.

Devo had it right, it seems now. The anti-war protests of the ’60s and even the Kent State shootings seem tame compared to what has been happening in recent months.

Devo was considered a “new wave” band of the ’70s. Instead of making music that was smooth or fun, new wave bands created songs that were deliberately jarring and choppy. Synthesizers were an important part of the genre; the artificial, non-rhythmic sounds ran counter to the measured time of mainstream Western music.

Mothersbaugh is still experimenting with ways to create music by pumping air through PVC pipe and pieces of metal and plastic. Here’s a clip from one of the pieces in Myopia:

It is part of the litany of the Law spoken by the Speaker of the Law to the Beast Folk, creatures surgically force-evolved by the mad doctor.

The Myopia exhibit is commentary on the racial and political tension that affects people everywhere in the country. So many of us avert our gaze because we think it will never be us, while the actual working majority are churning out ruby kusturds for the top 5%.

For awhile there, in the ’90s, we felt as though evolution was winning. The Cold War was over, new democracies born every few months. Technology held promise to advance knowledge and improve lives on a vast scale. Progress for women and minorities plodded on. Even a gay kindergarten teacher with AIDS was supported by the Seattle community.

Working in Afghanistan after 9/11 I felt tremendous hope. But then there was Iraq… and the financial crisis… and the pieces started to fall until we were left picking our way through heaps of hatred and violence.

Art can speak when individual voices are drowned and brains of the audience are numb.

Today’s penny is a 2014, the year that Ruby Kusturd was completed, five years after it began.